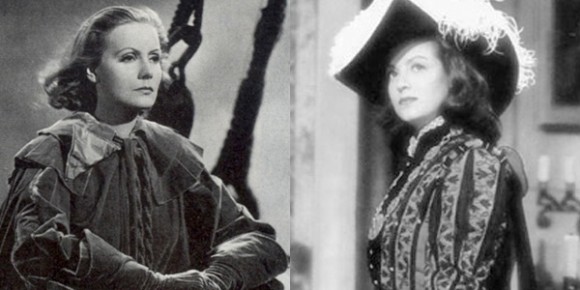 It’s a battle of the horse-riding sword-brandishing tough ladies that -actually- existed in real life, with lives brought onto the silver screen, beautified while being personified by THE faces of their own Golden Eras.

In the case of Greta Garbo, of course, with Hollywood in her most fun and most relaxed Queen Christina, often mistaken for a man and featuring the infamous scenes of Garbo kissing a lady and being romanced by John Gilbert while in mannish get-up. Then there’s the Mexican and Latin movie classic diva La Doña Maria Felix as Catalina Erauso, escaping a convent and dragging it up as Don Alonso, making the ladies of the Peruvian Viceroyalty swoon in La Monja Alferez, with a twist ending to match Some Like It Hot.

And to quote Toni Collette:

This is a tough one. I do have a terrible Greta Garbo bias, but I think I’m handing it down to La Doña on this one. Maria Felix is like the awesome fusion of everything that’s good with both Greta Garbo and Joan Crawford.

When women play tomboy girls or girls who have to pretend to be boys on screen is hardly believable, mainly because mainstream actresses are normally TOO pretty and productions wouldn’t bump the masculinity to make them look less like girls — at least that USED to happen in a film like Queen Christina (and Morocco, though I don’t think Marlene Dietrich intends to play tomboy as much as play Dietrich on that) [1].

Actresses like Bynes in She’s the Man [1] didn’t exactly hit the mark, though it could come close to Ella Chen’s level in Hana Kimi [1]. However, the other adaptations of the same manga series- the Japanese version of Hana Kimi with Horikita Maki [1] or the most recent Korean version To the Beautiful You with f(x)’s Sulli [1] suffer from similar problems. Same could be said for Zhao Wei- maybe I could overlook her role in Red Cliff [1][2], but I definitely CAN’T overlook her prettyfied self in Mulan [1].

In general, though, Taiwan and China leave me very surprised with the gender-bending… intended or unintended. It’s countless the times that I’ve asked myself whether I was seeing or listening to a boy or a girl. It doesn’t help that most names (without characters) look very gender-neutral.

ANYWAY, I’ve gone way off topic here. The main thing in this post is supposed to be Rani Mukerji, whom I saw for the very first time in Dil Bole Hadippa. Though it’s a pretty decent film, I’ve come to appreciate it more now for Rani- especially for her mannerisms in the Bhangra Bistar number. Though the number is before she gets to pretend to be a guy, her character works as a performer at a moving acting troop, with the lack of a leading man… she’s made to play the part.

And she does it perfectly.

I usually very hard to please on these issues, but Mukerji sells me the role of ‘the dude’ in this one. She pulls it off better than Ella or Bynes, though all of them get to be funny while doing so.

You can even see a bit of the shooting of this part of the film [1].

There’s also an official upload, but quality is not as good and they only include the musical numbers without context.