END_OF_DOCUMENT_TOKEN_TO_BE_REPLACED

I watched District 9 yesterday, and I enjoyed it a lot. Actually, I watched Moon this past weekend as well, which was also pretty great. However, I had noticed that I had previously marked both films as “not interested“. Why? Actually, because I marked most films that way, unless I’m already interested. But this also made me think about the films I’ve watched this past year, and which ones I’ve enjoyed the most.

I’ve never followed Star Trek, but I admit I enjoyed watching the film this year.

And on a similar topic, I finally finished watching Battlestar Gallactica Season 1. LOL

But why do I seem so reluctant to watch Sci-Fi? Yes, it’s the nerd tag… I guess. I think my mother puts it best — She’s not interested in aliens, in other worlds, or UFOs — I think I’ve had the notions that Sci-Fi was just escapism, and it is in some of the films, but some of my friends (some sci-fi and comic book lovers) have taught me and made me understand that Sci-Fi can be so much more. And I do love a good drama.

But in the end, people don’t really listen.

My cousin, yes… that same one that told me Love Happens was money well spent, HATED District 9. Her brief Facebook status read something like “District 9, sucks! Badly…” and it got a bunch of comments including mine asking whether to believe her or not, considering she liked Transformers 2 (So good, she said), to which she replied “aliens!? c’mon>>>> no more comments“. LOL – The fact that she thought the idea of aliens is ridiculous should have hinted that she shouldn’t have picked District 9. Actually, she told me she didn’t wanna watch Inglourious Basterds either, to which I fainted. xD

What is good sci-fi? My friend made me sit in front of my computer screen (we haven’t seen each other since we graduated) and told me I was wrong. He told me Good Sci-Fi is Good Drama, you get social commentary in the form of metaphor and you can place those stories in the real world. Good Sci-Fi is about the characters… much more than the universe created. He is the same friend who made me watch Firefly. Yes, that same sci-fi show that my sci-fi-hating mom loved to watch.

So if you’re not sure you like sci-fi, you can give Firefly a try.

As we see on Moon, it’s almost as if this sci-fi world becomes a character piece in which the main character talks to himself and re-discovers himself in the process. About his daughter, about his wife, about his work. The miniature models are far from the high-end spectrum of regular CGI effects, yet hold this charisma or perhaps it’s nostalgia.

On District 9, what could have been an alien invasion film with explosions where people save the day turns into a film where aliens live in slums among us, as big corporate heads try to find the way to use their bio-technology weapons and think they can get away with it when one of their workers begins changing. The character sort of begins a transformation worthy of Kafka, in which he starts becoming more a “monster,” but in reality human beings are the monsters. It’s sad.

END_OF_DOCUMENT_TOKEN_TO_BE_REPLACED 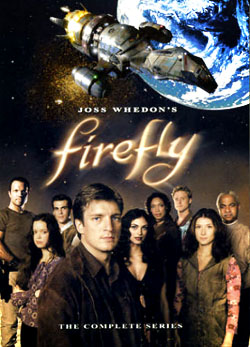