END_OF_DOCUMENT_TOKEN_TO_BE_REPLACED

After Dark by Haruki Murakami 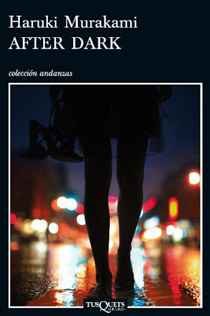 This is the Spanish edition of Haruki Murakami’s book also titled with the same name. It tells a bizarre real-time (think of Fox’s 24) story surrounding a 19-year-old named Mari who sits at a random Denny’s restaurant in the middle of the night, when a dude comes by telling her they’ve met once before, he’s a friend of Mari’s older sister, Eri. At the same time, Eri is seen in a neverending sleep, as if she never wanted to wake up again.

To be honest, I didn’t really get the chapters that described Eri’s bizarre sleeping sequences. At first, it was kind of scary, but it just didn’t do much for me in the end. I did really enjoy Mari, though. I wanted to know more about her… perhaps because I can relate effing around at a Denny’s in the middle of the night. Sometimes I would go there — maybe call a friend, or stop by a friend who lived around it — get something to eat or drink and waste time. I would also go on the longest walks around town with a friend at 2am, taking photographs or ending up at the local playground sitting on the swings. I still miss those.

Anyway, I digress. What I wanna say is that I could see a bit of me in Mari, so I wanted to read more about her. I thought all the stuff related (people, not incidents) to the Love Hotel was very interesting… Kaoru, Korogi and Komugi. And Takahashi made me laugh.

I gotta admit that this would play out nicely on a movie, though. While reading it, I was imagining Yu Aoi as Mari — I know she’s way too old for the role, but she can pull it off LOL — there was also Eita as Takahashi (tall, skinny and a feeling like you can tell him stuff), Shizuyo Yamasaki as Kaoru, Mikako Ichikawa as Korogi… and I had a dilemma whether to choose Asami Mizukawa or Kou Shibasaki as Eri. The good thing is that in the book everyone says Mari and Eri are very different. Mari is never considered gorgeous like her model sister Eri, so I could get away with any of the two. You could sense that Mari is pretty, but not in the “omg-she’s-so-hot” kind of way. I feel like Shibasaki would fit better as an older sister to Aoi’s Mari, however, Mizukawa is 2 years older than Aoi (same age difference with the characters) and I think fits better the whole “hot” factor. Plus, both Shibasaki and Mizukawa have shared the screen with Eita already. xD

As for the Chinese character, I dunno. Maybe Sandrine Pinna? I know it’s a pretty small role, but she’s sorta the same age as Aoi. I think it’s a tough role though, but it’d be interesting to see what the on-screen chemistry is on that particular scene at the Love Hotel. As for the other Chinese dude, I was thinking Chen Chang~~~ as for the office worker guy, I know he’s supposed to be in his 30s, but would I be pushing it if I’d say Abe Hiroshi feels like a good choice?

I want this movie made. Ha! With this cast! Make it happen Murakami-san!