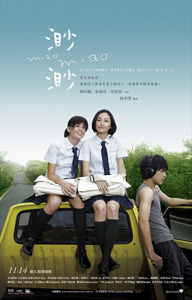 Synopsis: 18-year-old Ai loves baking, even if she’s not that good at it. She dreams of some day baking the perfect pastry, until she meets Miao Miao, a shy exchange student from Japan, who happens to be sort of a pastry expert.

I’m gonna go with Acerk on this one and say that Yu plays a great shy. I’ve only ever met a person that is like ShyMovieYu in real life, and let me tell you, you want to be near them all the time.

Now, before you tell me that this film feels very Taiwan and very not in Japanese, you’re right. This is a Taiwanese film, and it’s 99% in Mandarin, with Miao Miao ever speaking in Japanese in just a few scenes. However, nothing wrong with Miao Miao who is an exchange student from Japan being completely Japanese and speak in completely broken Mandarin.

One of the reason why I wish Yu had done this film is because I’ve read people saying Sandrine Pinna is the Taiwan indie darling, just like Yu is the Japan indie darling, which makes me laugh. Now, imagine the major spazzing if these two had made the movie together. Also, we would totally understand why Pinna’s Ai would be in love with Miao Miao in the first place, right?

The film is hardly best at anything. It’s a pretty good and cute movie with the highlight of Pinna’s performance, which got her a few bunch of awards, and it’s not that Jian-yan Ke did anything wrong, but I think Yu could’ve just pushed it a little bit further. Yu trying to speak broken Mandarin, which would have worked for the cute factor. Moreover, how can you refuse Yu Aoi with a baking/tasting pastries role? Considering she often says she loves to eat, there could have been such great eating scenes there.

Add to that, Pan-Asia exposure. Not that Yu needs any help being popular in Taiwan… but she would have earned major points from new Taiwan fans and Chinese fans if they hear her speaking Mandarin, even if it’s broken. The film also got released at the Berlinale and the Seattle International Film Fest, plus it got talked about in the LGBT circuits for its thematic. That’s more exposure, right?

8 responses to If Only… Miao Miao