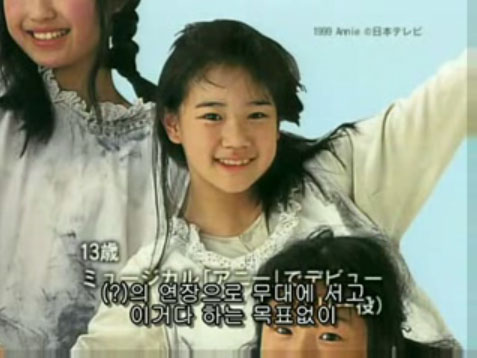 Yu Aoi set herself on the path to acting when she was cast as Polly in the 1999 rendition of Annie, followed by her appearance as a regular on TV Tokyo’s Oha SUTA (The Super Kids Station) in 2000. A year later, she finally made her silver screen debut in Shunji Iwai‘s All About Lily Chou Chou playing Shiori Tsuda alongside Hayato Ichihara, Shugo Oshinari, Miwako Ichikawa, and Ayumi Ito. Aoi would later work in Ao to Shiro de Mizuiro and Gaichu (Harmful Insect) with friend Aoi Miyazaki.

With her first roles on the small and big screen came commercial deals and endorsements for Sony, Yamaha, DoCoMo, Toshiba and Coca Cola.

In 2003, commemorating the 30th anniversary of Kit Kat in Japan, Shunji Iwai shot a series of short films starring Yu Aoi and Anne Suzuki, which later was expanded into the feature film called Hana & Alice, a film that earned Aoi the Best Actress award at the Japanese Professional Movie Award. 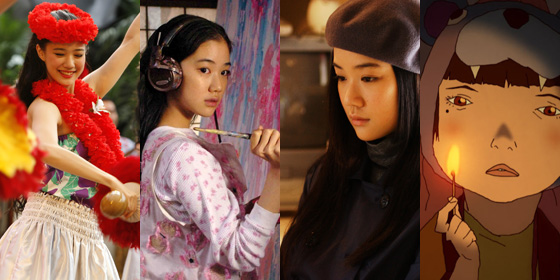 In 2005, Aoi played her first lead on the big screen in Letters from Nirai Kanai, which was sold in Korea with the alternate title of Aoi Yu’s Letter due to her popularity in the country. She also had supporting roles in the Miki Satoshi film Turtles Swim Faster than Expected starring Juri Ueno, and Yamato with Shido Nakamura and Kenichi Matsuyama. This supporting role would earn her one of her double-nomination as Best Supporting Actress at the 2007 Japanese Academy Award. She won against herself for her work as Kimiko Tanikawa in the Japanese hit Hula Girls, which was sent to the Academy Awards as the Japanese official selection that year.

To this date, her role as the hula dancing girl from small town Iwaki remains her most successful role yet, earning her a dozen awards as Best Actress and Best Supporting Actress, alongside her other smaller roles that year as Hagu in Honey & Clover, and Kana Sato in the Shunji-Iwai-produced and Nirai-Kanai-directed Rainbow Song. Aoi also lent her voice to play Shiro in the animated film Tekkonkinkreet, the adaptation to the Taiyo Matsumoto manga, Black and White, directed by Michael Arias.

During these years, she made commercials for Nintendo, Canon, the Japan Racing Association (JRA), Shiseido Cosmetics, Shueisha Publishing, Kirin Beverage and signed on to endorse DoCoMo with stars like Anna Tsuchiya, Kazue Fukiishi, Keiko Kitagawa, Tomoya Nagase, Satoshi Tsumabuki, Asano Tadanobu, and Eita. Moreover, Aoi also released two successful photobooks with Yoko Takahashi as photographer, and distributed by Rockin’ On, Travel Sand (2005) and Dandelion (2007). Add to that two interviews with NHK’s Top Runner in 2005, and TBS’ Jounetsu(Passion) interview in 2006, which was translated into Korean and Chinese.

Yu Aoi spend some time on the small screen during those years. First, on the 2005 Rakugo-related drama Tiger & Dragon, written by Kankuro Kudo, for which she starred as Risa. And finally she joined the cast of Dr. Koto’s Clinic, starting its second series in 2006.

2007 also proved to be a prolific year for her as she participated in the live action adaptation of the manga series Mushishi alongside Joe Odagiri, as well as WOWOW’s Don’t Laugh at my Romance, Welcome to the Quiet Room with Yuki Uchida, and going back to the stage to play Desdemona in a rendition of Shakespeare’s Othello. For these last two roles, Aoi showed to be moving closer to a more thespian career path by even losing 7Kg. for her role as eating disorder patient, Miki. 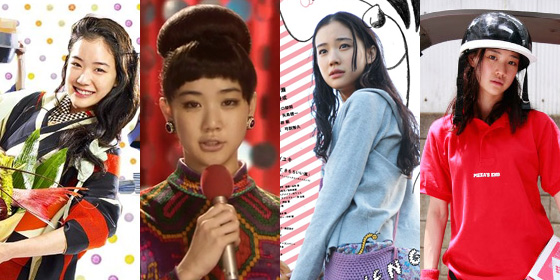 Aoi began 2008 with the release of Don’t Laugh at my Romance, which would earn her a nomination as Best Supporting Actress at the Asian Film Awards a year later. WOWOW would also get her for the experimental drama Camouflage (aka. Aoi Yu x 4 Lies), in which Yu Aoi would collaborate with four different directors exploring the theme of lies. The series lasted for 12 episodes, and included work with Ryo Kase, Yoichi Nukumizu, Shoko Ikezu, Nobuhiro Yamashita and Yuki Tanada.

A couple of months later, NTV would sign Aoi to play her first TV leading role as Handa Sen in the live action adaptation of Kikuchi Shota’s manga series, Osen, which aired until the end of June 2008 with ten episodes.

Next up, Aoi released One Million Yen Girl written and directed by Camouflage director Yuki Tanada, and also released by WOWOW. This had been her latest leading film role since Nirai Kanai in 2005, and proved to be a wise career choice by cementing her as a more serious actress. However, she didn’t forget her supporting roles, as she briefly participated in the Japanese World-War-II-jury-themed film Best Wishes for Tomorrow, as well as the international Tokyo! – a three-short-film collection by Michel Gondry, Leo Carax and Joon-Ho Bong.

During the year, she also released two photo essays, one titled Kaiten TEBURU wa Mutsukashi about her visit to Taipei, Taiwan, with All About Lily Chou Chou and Hana & Alice still-photographer Ivy Chen, in which she showed her passion for shaved ice also known as Kakigoori (Wikipedia). Her second photo essay was titled Kyou Konogoro and had photographs by Sayo Nagase.

By the end of 2008, she revealed that she had been to the Guyanas and visited the Amazon bank river alongside actor Osawa Takao for an Asahi TV adventure called The Lost World, which aired on December 22nd, 2008.

In early 2009, the Ministry of Education , Culture, Sports, Science and Technology of Japan named Yu Aoi Rookie of the Year in the field of Films in Media and Fine Arts, citing her work in her film debut in All About Lily Chou Chou, until her work in One Million Yen Girl.

The year, however, proved to be a quiet one. With no television appearances, little films and work mostly focused on magazine shoots and commercials shooting. By this time, she continued promoting Kirin Beverages, cementing herself as the main image for the Kirin Mid-Afternoon Tea brand, and started promoting LG Cellphones.

Yu Aoi released Honokaa Boy, in which she appeared for five minutes, proving she didn’t mind taking small roles that would elevate the profile of a project she felt was important, and took the part of Ikechan on the film Ikechan to Boku (also known as Good Bye, My Secret Friend) a live action adaptation of the picture book of the same name by Rieko Saibara, a coming of age story which let her lend her voice to the imaginary friend of Yoshio, played by Arashi Fukasawa.

She also took some time to return to the stage in the play Gakuya, which ran for a month and let Aoi act alongside Kyoko Koizumi, Nozomi Muraoka, and Eri Watanabe. 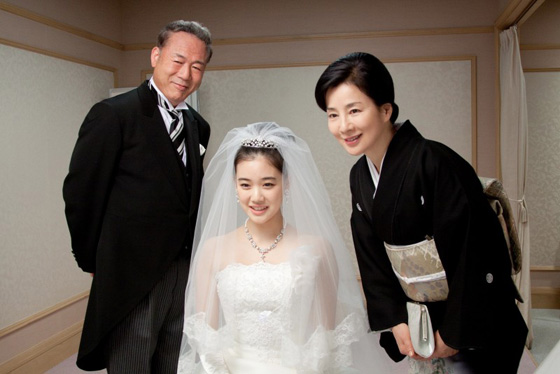 The first teaser for Yoji Yamada’s film Otouto, About her Brother, was released in October 2009, set for a release in early 2010. The film was important because it let Aoi work with the renown director, who happened to be the director of The Hidden Blade, one of her favorite films.

Aoi opened the year with more announcements. The first one being that she would star in the production of FLOWERS, which let Aoi and other Tsubaki Shiseido sponsoring actresses work in a film celebrating the different Japanese film eras telling stories about different generations of women. The second one, that she and Shunji Iwai would be back together for his English production debut of Vampire.

She followed that with the announcement of the film Yogashiten Coin de Rue, which was released on February 2011. In the meantime, Aoi did the U-Can commercials which came with a 11min. short film, Sute Neko OL, and decided to release her pop-up book Uso. alongside 3D exhibits in Shibuya and Nagoya. 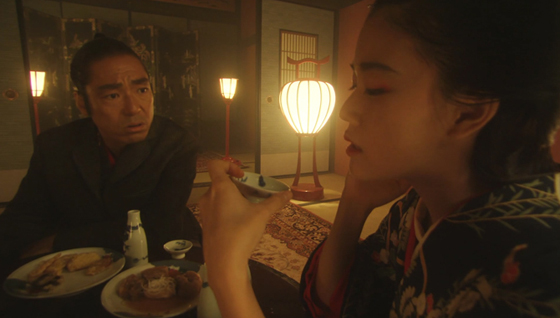 In June 2010, it was announced that Yu Aoi would be voicing a character in the Takeshi Koike animated film Redline, alongside Kimura Takuya and Asano Tadanobu, which would open in October 2010 in Japan and selected cities in the United States. In July, she did a one-episode guest star on the TBS comedy Unubore Deka, which reunited her with the Tiger & Dragon team, including Kankuro Kudo and Tomoya Nagase. That same weekend, Aoi’s episodes for NHK’s Ryomaden started airing for a total of 13 episodes, that would almost last until the end of 2010.

On November 2010, it was announced that she would be returning to the stage alongside Satoshi Tsumabuki for a new Hideki Noda play titled To South, which opened in February 2011 until the end of March. Some of the dates of the play were cancelled or re-scheduled due to the Tohoku Earthquake that hit Japan on March 11th near the north east coast of the country, which generated a tsunami that destroyed the region, and ignited the problems at the Fukushima nuclear plant.

The Hula Girls cast, which includes Aoi, donated ¥10M JPY to the city of Iwaki, which is the city where the film was shot, and the ones that are suffering the most from the nuclear disaster.

During these past couple of years, some of Yu Aoi’s sponsoring deals came to an end, passing the baton to new members for the JRA Club Keiba commercials, but she has continued work for Kirin and LG Mobile Phones, and started promoting Calbee Potato Chips. She currently is the 4th female personality in number of sponsors, promoting 10 companies just below Aoi Miyazaki (11), Saki Aibu (12), and Aya Ueto (13).

Shunji Iwai’s Vampire opened at Sundance to mixed reviews, but the film is still waiting for a wide release as it does the festival rounds.

Yu Aoi is also set to work with director Yoji Yamada once again in Tokyo Family, alongside Bunta Sugawara, Etsuko Ichihara, Masashiko Nishimura, Yui Natsukawa, Shigeru Muroi, Shozo Hayashiya, and Satoshi Tsumabuki. However, due to this year’s earthquake, Yamada has decided to postpone the film’s start-up date, which would have started on early April.