First a little about the film:
(from Wikipedia)
Shot in 2004, by Shunji Iwai about two girls [Hana (Suzuki) and Alice (Aoi)], and the stress placed on their friendship as they move into high school.

In case you’re interested, I invite you to catch the film at CrunchyRoll – because this post might contain spoilers xD, unless you want to be spoiled. 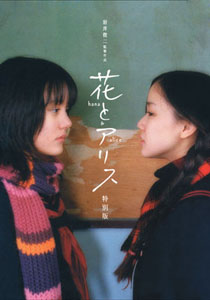 The film begins with Hana and Alice catching the train to school very EARLY in the morning. It is clear to the audience that these two girls are close friends, and goof around a lot together, even coming in and out of trains randomly…

The film has REALLY grown on me since the first time I saw it, which was probably 2 or 3 months ago, and I love it more each time I watch it (5 times, in case you want to know) – the thing is, the more I see it, the more I notice things I didn’t notice before. At first, I thought the film was good, but it felt too long… especially since the running time goes over the 2hr mark, yet I gave it props for how beautiful it looked… case and point, the ballet sequences~~ any of them, Fu’s “Dance of the Wind” photos, or Yu Aoi’s paper-cup ballet dancing.

Perhaps this is Yu Aoi’s ‘meatier’ role to-date, not only because she’s a title character (at least, one of the title characters), but I’ve found that Alice (as in ARISU, short for Arisugawa Tetsuko), has a very complicated life… I don’t know if it’s me, but I noticed Alice might be suffering from Electra Complex. This is something I noticed during my third viewing, something that made me go “oh, I see” out-loud.

You see, Alice is probably one of the few ‘adults’ in the film. She’s not a common 15-year-old… yeah, sure she goofs around, she goes to ballet class. However, she is the adult at home. Living in a sort of broken home… divorced parents, with a mom that doesn’t seem to be very motherly… and a dad that’s always away (of the city or country) on business. So you could say Alice is a neglected teenager, and who knows how long she’s been living like this. She sits at the dinner table to help herself to some homemade Sukiyaki, which she’s prepared after her mother publicly pretended she had no daughter. Yes, the scene at the cafe/bistro place with Alice about to get something to eat, and her mother pretending Alice was Hana, and not her daughter makes me sad.

However, Alice seems to care little, even pointing out that her mom should be looking for someone to settle in, like it’s a normal thing to give relationship advice (especially about boyfriends) to your mother. Moreover, the house seems to be a total mess… living room, kitchen, dining room, you can see clothing, trash, old magazines everywhere… except Alice’s room, which is pretty tidy compared to the battle zone xD

Next up, we see a scene of Alice with a man. They have a very calm, almost cold, talk about Alice’s High School Entrance Present, a fountain pen. When she asks whether she can use this pen or not, he tells her something like “yes and no” – LOL. It’s one of those gifts that you want to use, but not really want to use. They are both distant, yet they want to be closer… after all, this man is Alice’s father. This is probably the scene in which Alice acts like a kid… a young girl, eating [Tokoroten (Seaweed Noodle)], playing cards and talking about school. You can actually feel Alice wanting to be with her dad, not having to be the adult… She tells her dad “Wo Ai Ni” (I Love You, in Mandarin), to which her dad responds “Zai Jian” (Goodbye) as they part in the train.

It is after this encounter, things shift a bit towards Hana’s ‘amnesiac’ boyfriend – Miyamoto, aka. Maa-kun – as he seems to be a good substitute of company (you see, because Hana and Alice are not friends anymore), and Alice begins doing things she did on her dad’s last visit… such as going about the park, and eating Tokoroten, but all with Miyamoto… Then came the scene with the “Alice in Wonderland” Ace of Hearts card, which I thought it was from a time when Hana and Alice were friends, but as my friend pointed out today (my 5th time watching), it was actually referring to the time Alice and her dad were at the beach playing cards… it was from a time when Alice had a dad. She begins crying, and apologizes for it… T-T

So, yeah, this is the reason why I like this film. It’s not about the love triangle, which is cute… but I can’t really stand Miyamoto that much. At first, I liked the film because it was about two friends that chose each other above a teenage fling (I still believe none of the girls stayed with Miyamoto) – Now I like it because of the subtle, yet bit complicated relationship between Alice and her parents.

Favorite Scene: I’d have to say

Here are some posters…