Something about the film:
(from Wikipedia)
Otoko-tachi no Yamato is a 2005 Japanese war film telling the story of Kamio, a teenage boy who ended up fighting in World War II on board of the biggest Japanese battleship, and its crew who ultimately met its death in battle. 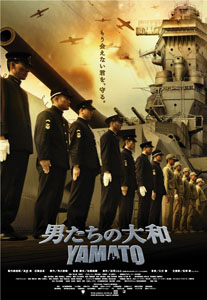 Yamato starts off with a brief intro on what Yamato was… the most splendid Japanese battleship of the time, and very historically important. During World War II, it was one of the lead ships alongside another similar vessel (Musashi). The ship never really fired its main guns until October 1944, and even then it was ordered to turn back. ANWYAY! The film focuses round the events leading to Operation Ten-Go on April 7th 1945, all told through flashbacks by 70-ish-year-old Kamio (Tatsuya Nakadai) who owns a small boat, which he commands with the help of Atsushi (Sosuke Ikematsu)… and the visit of Makiko Uchida (Kyoka Suzuki) who wants to visit the coordinates where the Yamato sank, the ship her father had fought for.

Makiko tells Kamio that Mamoru Uchida (Shido Nakamura) was her father, to Kamio’s surprise who thought Uchida had died in battle. This unexpected visit brings Kamio memories he had long tried to forget.

This is when we get to see 15-ish-year-old Kamio (now played by Kenichi Matsuyama) who has now enlisted to go to war and fight for his country… against the wary feelings of his mom (Kayoko Shiraishi) and long-time friend Taeko (Yu Aoi). Kamio’s father died for his country, and his brother is well on the way. Despite all of that, he decides to leave.

At Yamato’s, we get to meet the crew and all the people that made an impact on Kamio’s life as a young soldier and a new member aboard this ship.

Half of the film, and maybe a bit more is drama. There are some really good war scenes, specially during the Operation Ten-Go, which didn’t really turn out so well since they were blown up and it ends with the ultimate sinking of this ship. However, there are also some poorly done scenes – including the one with Yu after Hiroshima. I, for one, was fearful when Taeko (and Uchida’s girl) mentioned she was going to Hiroshima because I imagined the most horrendous things. So when young Kamio arrives to the hospital in search for Taeko, I was expecting to see Yu in more than a few red bandages… perhaps even a bit disfigured. It seemed the film ran a bit out of budget during those scenes, which was a real pity. It really does take you out of the film~~~

Despite all of that, the film does get emotional which I guess all war films tend to do. Some people may think this film portrays the Japanese as “too good” and may complain a lot (like the people complaining Letters from Iwo Jima). In fact, Letters from Iwo Jima is a really great and better film that this… just throwing this out there as a bonus. Plus, Shido Nakamura is also on that one~~

As for Yu as Taeko – Taeko loves Kamio, you could tell… and she says so herself. Kamio’s daft, however! And even tells her how with the death of his brother and mother, he is now alone – NOT! – How about Taeko! She gets mad, but lets it go because there really isn’t much time to be mad at one another. Kamio is about to leave, so she makes him a special Omamori (oh those damn Omamoris xD), and tells him she’s going to Hiroshima (le gasp! Don’t go!!). Yu is particularly cute on scenes, or crying a river… she’s a good crier, but the percentage of crying was too much compared to the number of scenes she had.

Anyway! A lot of names on this one~~ Sosuke Ikematsu played the young version of Yoritomo on Yoshitsune where Kayoko Shiraishi played Otoku. Kimiko Yo also appears!! She’s on Osen, as well as Atsu-Hime alongside Takahata Atsuko who played Atsu’s mother-in-law. Kenichi Matsuyama ended up being Yu’s love interest once again on Don’t Laugh at my Romance, which I will be reviewing in the nearer future… and, and Shido Nakamura was on Honey & Clover with Yu.

Favorite Scene: There are 3 or 4 scenes with her, but I’ll choose the bit where Taeko is telling Kamio how his mother died. Just that bit… even though she’s sweet and cute in most of the scenes or crying “break my heart” tears running down my face on the others. xD

Some posters and covers, and LOTS of screencaps.

And here are the captures…

Forgive, is just really so much simple with this gallery…