It’s been nearly 4 or 5 months since our last discussion, and I really thought there’d be more people discussing Tekkonkinkreet, but alas~ No one has commented on it. If you have just discovered Yu Aoi (either through Osen, or a random watch of either Hana & Alice, One Million Yen Girl or Lily Chou Chou) and have been hit in the face with like a meteor, I invite you to watch Tekkon as well. Any animation fan won’t really regret it.

Anyway, we’re here to discuss Don’t Laugh at my Romance, or Sex is no Laughing Matter or Hito no SEKKUSU~~~ whatever your pick on names is.

, directed and sort of adapted by Nami Iguchi. It is about a 19-year-old student (Matsuyama) who falls in love/lust with his lithography teacher (Hiromi Nagasaku) at university, though he isn’t aware that his friend and classmate (Yu Aoi) is quite fond of him. 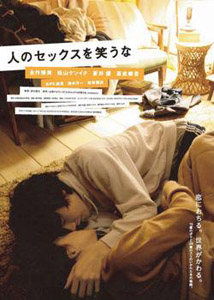 What can I say about Hito no SEKKUSU, other than I really suffered to get to watch this film. It was probably nearly 6 months after I watched it that I got to see it with subtitles, so it was definitely a different experience… now I’m just so used to it. The film is also really slow-paced and has no proper sex scene, even though the word “sex” is on the title… it’s also not overly romantic, so some misguided people might be disappointed or bored. The film is just about the complexities of human/lover relationships. So don’t be fooled by the title! After all, sex is no laughing matter.

The film starts with a quiet shot of early in the morning (?) in the middle of a nowhere road with Yuri (Nagasaku) walking almost aimlessly (home?) – she is trying to hitch a ride, but there’s no one there, until a really small trucks – you know, the Japanese ones – passes by with Domoto (Oshinari), En-chan (Aoi) and Mirume (Matsuyama). They stop and let her ride the back of the truck, with Mirume. Next thing we know, we’re at Uni for a coffee/smoke break and we see the interaction of the three friends. Mirume playfully pushes En-chan to the smokers area, she coughs waving her hand to keep the smoke stench away and sits next to Domoto drinking a juice box, while Mirume gives his smoke a few puffs. Next to him sits Yuri, who happens to be the lithography teacher. Mirume  (En-chan and Domoto as well) recognizes her, but she has just completely forgotten and left the incident in the past.

The story seems so simple. A boy (because that’s what he is) falling in lust with an older woman, who is at ease with her sexuality. She likes terrorist films, a big animals like donkeys… (…) she does things because she wants to and whenever she wants to – she’s almost like a child, in a way. On the other side of the coin, there’s En-chan, who often seems coy and is just smitten with Mirume, but he’s too daft to notice. And on the other coin… there’s Domoto who is in turn smitten by En-chan but she is too smitten with Mirume to notice.

However, most of the time (or mostly in its American counterparts), Mirume would learn a lesson from his older lover, notice his best friend En-Chan and realize she’s the one for him, while his “sidekick” Domoto would realize En-chan would be the happiest with Mirume. Not here. I was actually happy when Mirume got burned, and was left alone on the rooftop while Domoto got his chance with En-chan – because in my mind, they did get together. xD

I was actually surprised how much I liked Shugo Oshinari as Yu’s on-screen love interest, because as we know he’s played cold-hearted-and-evil Hoshino on Lily Chou Chou, and her domestic-violent-boyfriend on the Jdrama episode of Dr. Koto’s Clinic (series 2). In here, Oshinari plays quiet and worrisome. He waits for En-chan after classes, even though she’s totally kicking him out (full body contact and all), and wonders why he wasn’t invited for film festival night. He worries when En-chan seems gloom over Mirume, and worries when En-chan gets all existential on him. It is always En-chan who leaves him behind in the beginning, but then when En-chan begins her job, it is Domoto who leaves. That’s when their not-a-relationship shifts.

As for Yu, I think many have already mentioned that she was the life of this party. She even got a nomination for Best Supporting Actress at the 2009 Asian Film Awards~ She was oftentimes the one who got the laughs, and her character was sort of the axis of the whole thing. Without her, there’d be no “love pentagon” – it’d only be a love triangle.

En-chan is so innocent, that when Yuri asks if she’s ever thought or dreamed of touching Mirume that way, En-chan looks as if she’d never do that, but she’s thought of it before. She drinks hot cocoa, instead of coffee. Gets a juice break, instead of a smoke break. Mirume gets pissed drunk, she carries him to a hotel and not date-rape him. She doesn’t even kiss him. She’s good people with hopes and dreams (while she’s working xD), that get disillusioned with love and everything feels like falling apart, but she’s practical. She knows that everyone’s world falls apart one way or the other, so in the end that your world is falling apart is just the same as everyone else… so it doesn’t really matter. LOL

Favorite Scene: There are some great scene with En-chan, like her scenes with Yuri, or her realization that Mirume is with Yuri. I’ll just pick that last scene with Domoto, because her reaction is priceless. [don’t watch if you don’t wanna be spoiled, but it’s totally worth the watching xD] Oh! Oh! And Domoto visiting En-chan at work. xD

here are some posters and stills~~