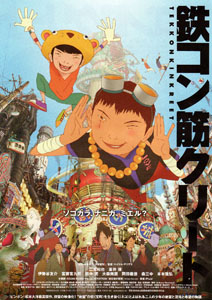 I enjoyed the film so much, that I ended up buying the American translation of the manga. The film, I believe, works as a faithful adaptation with the exception of the use of colors… after all, the manga IS black and white. This is why the film takes a step back and becomes richer in backgrounds, colors and textures – Tekkonkinkreet is just a pleasure to watch through and through.

Add to that a great voice acting cast, and you got yourself something worth checking out with subtitles.

The film begins with the introduction of Kuro (Ninomiya) and Shiro (Aoi) in the streets of Treasure Town when they’re about to attack another bunch of punks trying to take over the city, but no! This is the Cats’ territory, and you don’t mess with these crazy kids. They jump over cars, they climb over building and throw themselves to the concrete abyss without fear. The action sequence are out of this world with a great combination of wonderfully illustrated backgrounds and 3D camera movements.

I found a really great post over at The Art of the Title Sequence. This is a little of what they have to say…

The opening title sequence for Michael Arias’ masterpiece, “Tekkonkinkreet” surpasses the initial intention of Art of the Title in that the incredible, over-ten minute span between the start of the film and Arias’ director credit utilizes so much more than our limited conception of the possibilities of the form.

They also have the intro on SD and HD, alongside some audio clips with director Michael Arias, and Plaid.

The film is quite violent, but it has a certain balance… a certain innocence brought in by Shiro’s borderline naivety, but he knows stuff… he feels things, and is more in-tune with the surroundings than he leads to believe. Kuro brings in the crazy, the blood… the scary. He’s got terrible inner demons, and Shiro is the only one keeping him grounded, but not for long. This is why I love this film so much, because it plays with the concept of the Yin and Yang, the opposites who complement each other.

If you ever get the DVD, there’s a pretty nifty Making Of in which director Michael Arias documents his struggles making this film, especially the problems he ran into when making the Shiro’s dream sequence. I was only a bit disappointed on the little to no mention on how the voice acting cast work, because that’s also one of the fine points in the film.

Yu as Shiro was totally out of this world. It helped that it was an animated film, and all Yu needed to do was use her voice to become someone, and it really worked. She becomes this kid, saying the craziest things… you know, things that make no sense because you’re either a little kid, or you’ve smoked really good weed. From things like showing off how Shiro can count, or the philosophical “why do I feel so blue when the sky is black?” – paraphrasing here~~

Plus! Shiro totally saves the day on this one ;)

Favorite Scene: There’s so many great scenes with Shiro on this one, and like I said… Shiro saves the day on this one. I could choose that… but I’ll choose the scene in which Shiro gets taken away, after the incident with the “tough” guys.

Here are some posters and graphics, fanart credit goes to tobiee