You’re in luck! Well, that depends on perspective~~ I was lucky (or not) to watch Henshin and it turned out to be the film right after my previous review, so I killed two birds with one stone. So here we go…

Something about the film:
(by me, ‘coz everyone misguided me to this film)
A 2005 film about Junichi (Hiroshi Tamaki), who has recently gone through a brain operation, and while his recovery seems to be going on the right direction, not all is well inside his head. Before the surgery, Junichi was a nice guy, hard working, a painter… and a loving boyfriend to Kei (Yu Aoi). Now, however, he has quit his job, has violent outbursts, has stopped painting, and is not longer interested in his girlfriend. 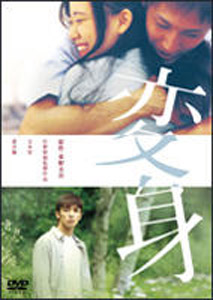 First of all… WTF is this movie? LOL’ I’ve seen it labeled as a “romance,” so after reading the “boyfriend doesn’t love girlfriend” thing, it had me prepared to cut my wrists and cry them a river by the end of the film. Also, the poster… man! Were  you as misguided as me?? The poster smells Romantic Drama all around, but don’t fool yourself, Henshin is no romance.

Henshin means transformation, or metamorphosis. In the film, it doesn’t happen physically, but mentally as Hiroshi Tamaki’s character all of a sudden loses it and begins strangling women, or intimidating strangers at a bar with a lighter. It also doesn’t help that Yu’s character can be described as ‘clingy’ – just a little bit. LOL’ Especially during the final bit of the film, where I actually yelled “Kill her!” LOL’

Perhaps the film would’ve worked better as a Sci-Fi Thriller Drama, but the film is a sound/editing/mood mess, as it jumps from a romantic drama to a sudden sci-fi feel, to a dramatic thriller, and keeps on jumping to the romance. I GET IT! Junichi cares for Kei and she’s what keeps him human, but do I really need all these PMS mood swings that I got in this +1.30hr??

And could the synopsis about “the bold decision” he must make be more specific? I get it, someone played with his brain, he can’t fix it… but come on! I didn’t even need subtitles to get that~~

Henshin needs a re-write, change of music, editing… and a new ending. If you get rid of all the romantic parts that make girls go “aww” and keep the scenes of them together having a grown up relationship, you could’ve gotten away with a double tragic ending of Junichi killing Kei and then killing himself over the guilt. But then, I’m a sucker for those endings most of the times…

Favorite Scene: *sighs* If I must… hmm, that scene where Kei is trying to get through to Junichi, and he keeps shutting her down – literally – pushing her around, hitting her… but she keeps at it.

Sorry, couldn’t find many posters or covers for this, so it will have to do.