The show tells the story of a detective whose ex-girlfriend is now married to his newest co-worker. Now, for reasons unknown, he always ends up obsessed-in-love with women who turn out to have committed crimes. In the end, he always ends up asking them to choose between marriage to him, or being arrested… without much success for him in his love life.

Well, that’s the best thing I can do without subs.

In this week’s episode, Yu plays Konuma Setsuko, who appears to be your everyday masseuse. One day Unubore ends up in the massage parlor she works in, and falls in love just by her touch.

A lot of kinky stuff going on. 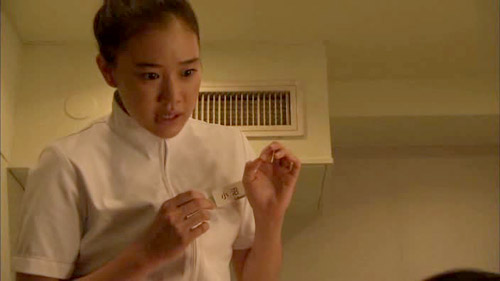 Overall, the episode was fine. A lot of physical humor — even though it’s almost the same people who worked on Tiger & Dragon, which was a super funny show driven by dialog. Tomoya Nagase’s performance seems pretty much the same in terms of features and ticks. I will be watching this waiting for the subs, to make up my mind about it. I’d only wish they were doing softsubs, which can be released faster though. Episode 3 looks promising.

As for Yu’s performance. First in 2006 as nurse… now as a masseuse. Okay. Subtext. Get the mind off the gutter, me. A lot of the jokes seemed to have that subtext, which is funny for the image I have of her as an idol. Though she plays the happy-go-lucky, cute and innocent girl at the beginning, we all know she’s guilty for the mere premise, so I was eagerly waiting for it…

You know what I think about MeanGirlYu. Well, I’m glad to say that I thought she was better. You know that she’s got different voices… like her cute chirpy sponsoring voice [eg. the one she uses on Kirin CMs], and she’s got that other mad angry/crazy voice [eg. the one she used as Shiro on Tekkon]. Well, she’s managed to finally use a serious angry voice when turning face by the end of the episode. She like had a personality switch, and I liked it.

The best scene, I really don’t know why, was when she took the handcuffs and put them on herself. There was something subtle in that bit… other than acting cute or crazy.

By the way, it’s only 5hrs to Yu’s debut on NHK’s Taiga Drama Ryomaden~~~