This film discussion doesn’t come until after the Honey & Clover live action movie, but I thought it will be good to post this now since Cinemax Latin America is showing the film this December and January (and perhaps scattered February, check times here).

This was probably the third film I saw of Yu, I was most impressed with the fact that Asians could move their booties like that… call it my Latin American gene that told me that the Asian gene makes you unfit to dancing. xD

Here’s the 12-part video on YouTube. Or just wait for it on cable…

A little about the film:
(from Wikipedia)
It’s a 2006 Japanese-award-winning film based on true events of a small coal mining town facing the shut down of the mine, and looking at the loss of +2000 jobs. While all the grownups seemed to be fuzzing about the future of their coal-legacy, a young group of girls see a gleam of hope in the opening of The Hawaiian Center, and hula dancing. 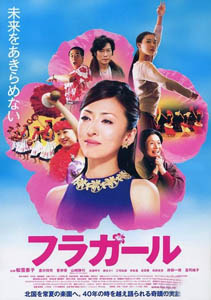 The film begins with a brown-tinted shot of 1965 mountain town Iwaki, in northern Japan, and a girl reading a Hawaiian-Center-Looking-for-Dancers ad on a dusty wooden message board. Her name is Sanae (Eri Tokunaga) who quickly informs her very-best-friend, Kimiko (Yu Aoi), of this opportunity.

Times are changing and the heads of families are losing their jobs for the increase of other energy suppliers, the town is about to disappear and people are mad. Except, there are some trying to open a Hawaii Center to try and save the town… with the help of their own people. The mountains and tone of the film is depressing, and it made me feel like Hirayama-sensei when she realized she was trapped in Iwaki, but…

If you know your Asian films (Japanese films) well, you will find little to anything new. If you’re looking for ground-breaking, just look away. The only way you will enjoy this film is by wanting to have a good time. I came to see the film not knowing anything at all, so I was very pleased, and I had no doubt in recommending this film to family and friends wanting to amuse themselves, because fact is that everyone I know that has seen it (meaning, I made them watch), was left with a silly grin on their faces~~ something that makes it hard for me to choose a favorite scene…

I asked my mother what’s the thing she remembered the most about the film (other than the dancing), she said the scene in which Hirayama-sensei is introduced drunk… go figure that one! The fact is, choosing the dancing sequence as a favorite scene is the easy way out, and seeing the film over four times already doesn’t make it easier to choose. I don’t speak Japanese either, so it makes the subtleties in dialog hard to get… subtleties given by the dialect spoken. This is why perhaps the subbed-film will be lost in translation, not to mention a dubbed version – yes, I got to see the Spanish from Spain dubbed trailer of the film, UGH – with all of that, it’s hard to choose a truly favorite scene.

But let’s talk Yu Aoi. This is probably the film that has earned her the most awards to date – of course! The film is a crowd pleaser, and you can’t help but to root for Kimiko. Even my mom rooted for Kimiko… and she never roots for anyone. LOL’ – There’s loads to see of Yu Aoi on this one~~ Shy Yu, Bouncing with the Ballet Shoes Yu, Smile like a Pro Yu, Pissed at the Teacher Yu, My Legs are Cramped Yu, I Drank the Sake Shot Yu, and all the Yu’s you can probably imaging including Shake that Booty Yu. Sounds like a Mattel Yu Barbie ad campaign… x’D So if you want Yu, watch this one.

Favorite Scene: Hardest thing to pick! People will expect dancing sequence… any of them~ But maybe the scene in which Kimiko tells Hirayama-sensei off by calling her an outcast, the teacher slaps her, and Kimiko ends running off… again. It is later followed by Kimiko’s meeting with her brother, in which she drinks the glass of Sake in one go, and finally ends with Kimiko smiling like a Pro on the bus. [03:00 – 07:30]