Hmm… I actually saw this a long while ago, and I couldn’t re-watch this because I lost my copy, silly me probably didn’t back up. And I couldn’t take any screencaps of Yu in it. I might… someday, take the time to do it, but if you have the film at hand (because you are about to watch it, or plan to)… would you do some captures of Yu and shared them here? Just a few captures would be nice since there aren’t many images online~

Anyway! Let’s start, shall we?

Something about the film:
(From AsianMediaWiki)
Best Wishes for Tomorrow reenacts the war crimes trials against Lieutenant General Tasuku Okada, commander of the 13th Area Army in the Tokai region, and the general’s 19 subordinates who were accused for executing 38 American soldiers who had landed in the region after bombing it with high-explosives and napalm, killing thousands of civilians. 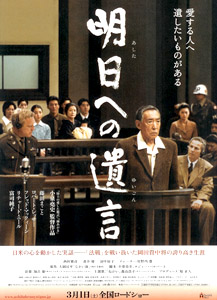 The first thoughts I have on this film was that it has an interesting subject matter, but after the nearly 2hrs sitting in front of a screen left me with the feeling that this could have been achieved better. I don’t know how, but somehow… some way~~~ Why? Pretty much the whole film centers solely in a courtroom, showing scenes of flashbacks here and there, overlapping news articles explaining… bombarding with information, but always coming back to the witness taking the stand, listening through headphones, answering, and translating. This makes me feel like there will be a LOT of people hating this film, and thinking it’s a very boring ‘war film’ when, in fact, this is not a war film. It’s more a documentary… almost. Imagine a nifty Discovery Channel or BBC Documentary flick. LOL

The film IS interesting, but I don’t think it’s suitable for your average movie-goer. Also, if you’re in to check Yu Aoi out, she’s in like one scene talking about where she was when the attack took place (with a friend on the train… now that friend is dead), so if we can avoid the “this movie suckzzzzzz” comment to keep the rating in some film sites slightly better, the better~ xD

Okay, now that we’ve passed that. The film rises quiet a few interesting things about what things are considered war crimes and what aren’t. In the end, I think the ones who win the war will always be the ones who don’t commit them… until there’s another war, they lose it and are finally tried.

Yes, attacking Pearl Harbor was a horrible thing to do by the Japanese… but it was a Naval base, unlike the atomic bombs which killed and affected millions of civilians. Man, being in the position of war… it’s a tough spot to be in. It’s war time… if someone enters my home, I don’t know what I would do. It’s a bit of a gray area, even though people won’t always agree. One must do what one must do to protect yourself and those around you.

However, if General Tasuku Okada and his men were tried for killing… or executing these American soldiers, why wasn’t the American president, or even Oppenheimer who created the nuclear bomb ever held responsible… he wanted to test the bomb, and as I remember from a paper I did years ago, could have been a bit of a mental case. But hey! Americans won the war, you never ever try the winners… – Sure, there are always casualties of war, people who were there at the wrong time, people who were there with the wrong people. They happen. However, the victims in Hiroshima and Nagasaki weren’t casualties… generations after them aren’t casualties.

Take the sample of Yu’s character, Kazuko Moribe. She was on a train with a friend when the air attack began, one of the bombs killed her friend. None of them had anything to do with it, why was her friend’s life taken away? She wasn’t walking through a secret conspiracy cave. It was just the train.

Anyway, like I said… there isn’t much to talk about Yu on this one. So I’m probably cutting this short~~

Favorite Scene: There’s that one scene. LOL’ I’ll leave you with this video of Yu and a few seconds of the Making Of.

I’ll leave you with some posters… and again, if you are able to screencap – it will be awesome.