Let’s start with what the film is about:
Live Action version of the famous manga series Hachimitsu to KURO~BA, it follows the lives of five art school students, who are trying to find their way through life and love. Takemoto is not a very good art student… preferring to talk about Japanese castles and models. Morita (Yusuke Iseya – Kiraware Matsuko no Issho, Blindness) is an amazing artist, but fears the real world and prefers to stay behind in the safety of college life. Mayama (Ryo Kase – Tokyo!, PAKO to Mahou no Ehon, GUGU Datte Neko de Aru) is in love with (and stalking) his boss, while Yamada is head over heels for him. And Hagumi (Yu Aoi) is a child prodigy… 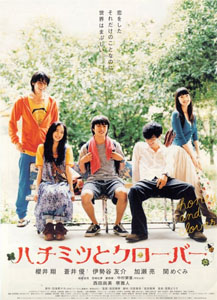 It starts with an introduction to Takemoto, and his life at art school. Girls think he’s pretty lame… wouldn’t make a good boyfriend to show off, but perhaps he might be nice. In fact, Takemoto is the nicest dude you’ll meet… good buddy, makes gyozas for everyone, and even lets you share his room when yours smells like ass. You would trust him taking care of your little sister… or in the case of Hanamoto-san~~ your cousin’s daughter, Hagumi (Hagu for short).

If Takemoto seems to be a talentless art student, more interested in building miniature models of historic Japanese castles, and not really interested in art – Hagu is the opposite. She’s an art prodigy, and lives for painting canvases and working on her sketchbook. But Takemoto falls in love at first sight (does anyone fall in love at first sight anymore?), or perhaps he feels fascinated by her and her creativity… her passion.

Takemoto and Hagu are both shy and quite quiet, so it’s a total shock to meet Morita, who is a show-off, loud and perhaps a bit obnoxious, but he’s a talented artist. He is interested in Hagu’s sketch art and forcefully tries to get her name, but she just runs away like a scared deer. LOL’

On the other~~~ side of the story, there is Mayama who is stalking his (soon-to-be ex-) boss at the design office he is working. You see, he is ‘in love’ with her~ but takes the creepy path and collects stuff she’s used, but Ryo Kase can do the creepiest thing and I’ll still like him. Ha! And then there’s Yamada who loves Mayama a lot, but hurts so much when she finds out he’s in love with someone else.

Going back to our love triangle, I could faintly understand Hagu being interested in Morita… or more precisely Morita’s art. Hagu is attracted to art, and she finds his fascinating. And don’t tell me I was the only one getting the hint of “it’s big, it’s hard, and it’s curved” – DIRRRTY. But he was ultimately quite douchey… and he didn’t really care much about Hagu until Takemoto told him off, BUT Takemoto also irked me due to his ability to remain just quiet.

On Yu’s appearance? Performance was nice… very little words were spoken, but her face and eyes are so expressive~~ Especially in America, even young actresses seem too scared of expression lines… so don’t even talk about older actresses. It’s a pity many are frozen!! Yu, though, very expressive, but she was quite tiny (I know she’s small), but she was also pretty skinny… probably prepping for her role on Quiet Room? I really don’t know the timeline of shooting and movie release.

Favorite Scene: I know I’m supposed to say that her painting scenes should be to notice, but I’ll choose a particular scene which she shared with both Sho Sakurai and Yusuke Iseya. When Hagu and Takemoto first find Morita looking through her art. Hagu’s reaction to him are of avoiding, hiding behind Takemoto~~ I thought it was quite a genius scene.

Here’s some captures, and posters~~