So it’s been almost a month since the last Film Discussion because I thought it’d be good to keep Hula Girls up while it was playing on TVs in Latin America. So expect more reviews more often this time around… unless they show other Yu Aoi films on cable, of course. And Happy New Year!!

So this Kame movie, or Turtles Swim Faster than Expected, comes after Hana & Alice according to various filmographies…

What’s the movie about?
(from AsianMediaWiki)
Film starring Juri Ueno as Suzume Katagura an ordinary housewife (despite how only being 23), whose husband goes overseas on business leaving behind his pet turtle at her care. She lives her days monotonously, wondering if she will ever be noticed, until the day she spots a tricky ad sticker searching for spies. 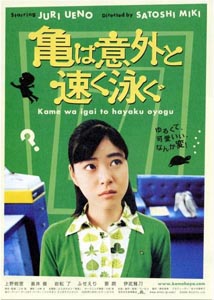 The film begins with Suzume’s ordinary everyday/animated intro~~ and the feeding of a funky turtle. There are some crazy throwing of the turtle with a parachute, some overflowing turtle food, and a ninja plumber that unclogs the pipes at Suzume’s turtle feeding place. Crazy… snort funny, I tell you.

More funny ensues when Suzume goes racing up a the 100-step-staircase, and a whole massive bunch of apples drop down in an avalanche… finding a spy sticker ad. Poor her, no one notices her… she feels invisible. This is her chance! But first things first… she’s on her way of meeting Kujaku (Yu Aoi), her childhood friend, but Kujaku is late. So Suzume decides to get wavy hair… and ends up with a perm. xD

Kujaku and Suzume were born on the same day, at the same hospital. Even Suzume’s mom decides to name her daughter Suzume (sparrow) because of Kuyaku’s mom decision to name her baby Kuyaku (peacock). So Suzume has always been the ‘less’ fancy version of Kujaku. While Suzume builds regular sand castles, puts smiley face logos on her bag, becomes a member of the horticulture club and wins some money with a science project, Kuyaku builds sand pagodas, puts Bjork stickers on her bag, is a member of the wrestling team and wins money on horse racing. Yes, they are both different and they are friends, but things are not as they seem.

This is what the title perhaps refers to… turtles are dull, slow. But they are faster than expected? The film is a quite silly friendship spy comedy about the ordinary. It takes a LOT of work to be ordinary, so in the end… the ordinary is not so ordinary, is it? Okay, I thought the film was pretty weird the first time I saw it… but I could even admit it’s pretty funny because Juri Ueno is, as well as Yu Aoi. There’s a lot of classic moments in the film, my favorites being the Azuki Panda-chan moment, the hue-hue-hue laugh, the puan~~ and the perms. You cannot forget the perms. LOL

Yu Aoi with an electric perm is super funny, and even her Kuyaku I’m-cooler-than-you-attitude is snort worthy. I actually didn’t think it was going to be so hard to talk about Yu’s performance in this film, it’s just important to note that it’s funny. xD

Here are some other two posters I found…