Sorry for the delay *hides behind a wall in shame*, but here it is~~ FINALLY!

First, here’s something about the film:
(from Eigapedia)
A 2001 film of a girl named Sachiko (Aoi Miyazaki) who befriends a street kid, and the things happening around her due to things she’s done and witnessed in her short past.

Things you might consider spoilers ahead, you’ve been warned. 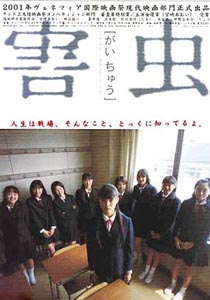 The film begins with quite a nice shot of pillow feathers floating in a room, as Sachiko’s suicidal mother slumps on the floor ready to end her life. This scene is overlapped with Sachiko’s classmates in school gossiping about the incident, and a brief introduction to Natsuko (Yu Aoi) who doesn’t comment about it.

Next up we see Sachiko (Aoi Miyazaki) in her ‘normal’ life, first interacting with her mother, and other people. Guys go after her asking her about her period (weird much?), old creeps stalking her (ugh), and Sachiko just seems eager to be left alone. She is pretty much an independent teen, who has been neglected by her surviving-mother… and that’s just within the first 10min. of the film without saying a word.

The film makes a turn when Sachiko meets a street punk, and don’t tell me he’s not a punk, because he is. I could think her only interest in him (and the other guy) was because he didn’t know anything about her past, and he couldn’t judge her. The only one who seems genuinely interested in Sachiko’s welfare is Natsuko, but all her attempts are in vain because Natsuko knows or is aware of Sachiko’s past, which doesn’t work for Sachiko.

The feel of the film is very similar to All About Lily Chou Chou, in that it gives you the feeling of impending doom, only with less visuals and a lot more silence. Gaichu is a very quiet film, as you mostly hear background noise (eg. birds chirping, the ocean), and Aoi Miyazaki barely speaks in the first 30min. of the film, which I think is amazing. I enjoyed her best in all the quietness, than her talking scenes… there was something about the silence that made it work. It’s all the apathy around… is everyone really that apathetic? All the grownups, Sachiko’s mother… my mother would probably bust some balls if someone had tried to do something to me. Of course she would probably kick the crap out of me for skipping school too, but at least she’d do something.

Anyway, onto Yu. She’s not in very much of the first hour, just in some scenes scattered throughout, but Natsuko makes a pretty interesting character. We don’t really get to know much about her, but I would’ve liked to know her reasons, after all the dude chose Sachiko over Natsuko, and she seemed upset. We know she is friends with Sachiko, and that she’s good-natured, and stands by her side, but why would she seem upset about a guy, when just a moment before she seemed happy for Sachiko. Also, with everything going on, Natsuko could’ve just walked away at any moment, she could have deserted Sachiko, but she didn’t… she held her hand in a hallway full of watching eyes. Oh the gossiping in that scene, I could totally hear them say “ZOMG, look! They’re so totally together.” – LOL, only wishful thinking! xD

In the end… did Natsuko leave Sachiko, or did Sachiko just left? You know, sometimes friends are all that matter…

Favorite Scene: I should say the scene of the incident at Sachiko’s house, and the holding of her hand, but I will choose the continuous sequence of Natsuko and the other classmates trying to pick up Sachiko for school, Sachiko leaving alone, and finally just Natsuko arriving alone to overhear the piano.

Sorry, not many posters found this time xP