This is officially my 2nd Yu Aoi film, which I saw right after All About Lily Chou Chou. Considering this is the first time I get into Japanese entertainment like this, I had no knowledge about anything. This is the reason why (I think, I’m pretty sure about it) I thought both Yu Aoi characters in the films were two completely DIFFERENT actresses… until I went to vote on IMDb and noticed that her name was already visited. Same thing with Hayato Ichihara… two different people, I tell you!!!

I also watched Rainbow Song because I liked the simple poster. LOL! Little did I know that it had something to do with Juri Ueno, Yu Aoi, Hayato Ichihara… and that Shunji Iwai’s name was involved. Well, I actually thought I knew Juri’s name from the opening credits because I was watching Last Friends during those days… le sigh, oh how time flies!

Okay, let’s see… a little about the film according to Amy.
This 2006 film directed by Naoto Kumazawa had Shunji Iwai as producer and ghost-writer. It stars Hayato Ichihara as Tomoya, a young man working as staff in a television studio, who finds out his friend Aoi Sato (Juri Ueno) dies in an airplane crash. 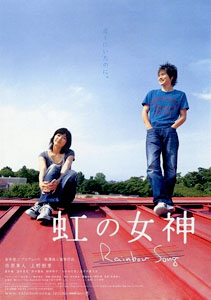 Without knowing what the film was about, the story began awkwardly with the announcement of Aoi Sato’s death. Everyone at Tomoya’s workplace seems shocked, and Tomoya… he’s somewhere out there. We are unsure who Aoi is, and what this woman means to anyone. When we meet Aoi’s family, Tomoya and Aoi’s former boss pay their respects, and we see Aoi’s little sister, Kana-chan (Yu Aoi), who is blind.

The Sato family is about to retrieve Aoi’s body, but Kana doesn’t seem to want to do it… She’s pretty much the only person who seems affected by Aoi’s death at all, until the scene at the airport.

Though it seems it’s a regular love story in which boy meets girl, girl meets boy who’s stalking another girl, and girl rejects stalker boy, when finally boy befriends the first girl… the film is about the developing relationship between them, as well as the development of feelings towards the characters. The build-up from the beginning when we don’t know anything about these people, until the end of the film, when we… as Tomoya does, realize Aoi is gone, and what he’s lost.

The BEST thing about the film is the fact that no actor outshines the other. Juri Ueno, Hayato Ichihara and Yu Aoi, each own their scenes, which gives a great balance to the film because you can care for their characters equally and not feel we’re wasting precious minutes. Juri shines as Aoi, especially when she’s filming “The End of the World,” and the scenes with Stalker Boy… case and point, running to the police and out of the taxi, or the after-speed-date-walk. Hayato somehow makes someone so clumsy, so indecisive… someone who will probably irk me, seem very appealing and charming. You know, just like how Aoi described him…

However, we’re here to talk about Yu Aoi, Kana-chan! I remember I bought she was blind, and I think I can still buy it. Yu’s characters, always smarter and more insightful than the rest in the story. Though she’s, in fact, older than Juri and Hayato, she plays Juri’s younger sister. I’m guessing it’s because when you need someone young and insightful, you must call someone older who looks young. XD So Yu plays 16-year-old Kana, who is blind but sees better than the rest… who’s not present, but understands better. She is taken care of, but needs no help at all…

On “Chapter 4, The Sister,” we see a perfect (and the only) example of the three characters interacting with each other at the local festival. Tomoya invites himself to the Sato’s sisters festival outing, but promises Aoi he will pretend he’s not there as to not disturb Kana. When Kana decides she wants some shaved-ice, Aoi goes for a minute, and Kana decides to acknowledge Tomoya, telling him she’s always known he’s been there. She also points out that her sister will let her do anything that day because he is around… hint, Tomoya?

I loved the interaction between Tomoya with Aoi, and Tomoya with Kana… from the time when Kana asks Tomoya to go with them to retrieve Aoi’s body, to the time of the final scene when Kana is with Tomoya and they begin reading the letter Aoi wrote for Tomoya.

Favorite Scene: Final scene with Yu, Hayato and the letter~~~ It just kills me every time…