You know what this means right? I finally saw a new Yu Aoi film, so I can move the queue just a little bit. We’re discussing Honokaa Boy first, then Ikechan to Boku… instead of One Million Yen Girl because of the length of roles that Yu had in the films… and we’re leaving Hyakuman-en up on the feature spot for a while… ;P

First a little about the film~
Honokaa Boy tells the story of a boy – Okay, a young man – who ends up living in the small Hawaiian city of Honokaa, after he mysteriously falls in love with the place during a failed trip with his girlfriend. In there, he meets a bunch of quirky people that are very likable, who end up having an impact on his life. 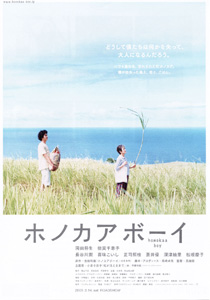 In Honokaa Boy, Masaki Okada plays Leo, a young man having relationship trouble. His relationship with his girlfriend, briefly (literally) played by Yu Aoi doesn’t work, and Leo ends up living in the island meeting a bunch of people. One of the persons he meets is an old woman who lives alone – a widow for the past 50 years, and is a great cook. One day, he leaves a bag of flour at her place, and she suddenly invites him back for a home-cooked meal, which he couldn’t possibly resist since he is living off instant noodles. After that incident, a friendship starts.

The pacing of the film is slow, as it is in many Japanese films, and it has a simple premise. Most of the weight falls onto the characters themselves. Leo is a perfectly charismatic guy, while Bee-san (Chieko Baisho) plays a perfect counterpart – Keiko Matsuzaka was also great – but what made the film is the platonic relationship between Leo and Bee-san who are ages apart in years. Bee-san even tries to make herself pretty with a trip to the beauty shop, and a brand new bright-colored dress. However, as any relationship must suffer, theirs is threaten by Mariah (Jun Hasegawa), a young woman working at a local store. Leo seems interested in her, and why shouldn’t he? She’s attractive, he’s attractive. They’re both young.

The only thing I have to complain is Hasegawa’s performance that seemed flat and out of touch with the whole feeling of the film. Her line delivery was even worse in her perfect English, than it was in Japanese. But that’s maybe me… and I’m biased. But she really was the least memorable character on the film~

I mean, except for Yu-chan. Gosh! Talk about a blink — for too long — and miss it role. She’s literally in the film for about 5min. before she’s gone forever. The most I remember about her character was the bit where she’s sitting and Bee-san (that was Chieko Baisho, right?) drops liquid on top of her head.

Overall, Honokaa Boy has some great moments, though.

But if you’re in it for Yu, and have no faith it Masaki Okada – you can stay away. LOL

Look, here’s a picture of it~ 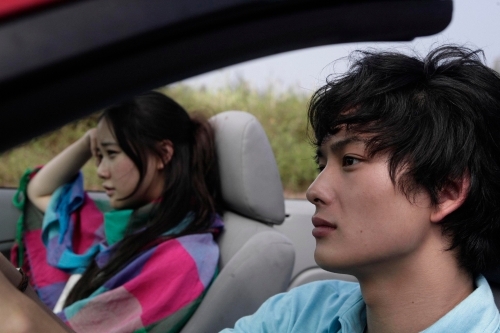