Having said that— the promo photos. Whee-in, you bias wrecker, you. So I finally decided to put together my favorite era looks for each member ^^ END_OF_DOCUMENT_TOKEN_TO_BE_REPLACED

(even though I haven’t been writing at all~~~ lol)

I hope I get to be more productive next year.

A moomoo, I don’t know if it’s 붕붕 (with this current twitter handle, amoo0619), released all the remixes they had done with Mamamoo soundbites after Moonbyul had asked about the Hwasa x Ghost soundbite from their MMMTV; and it’s hilarious – especially if you know where the soundbite comes from xD.

So, of course, I added it to my library. 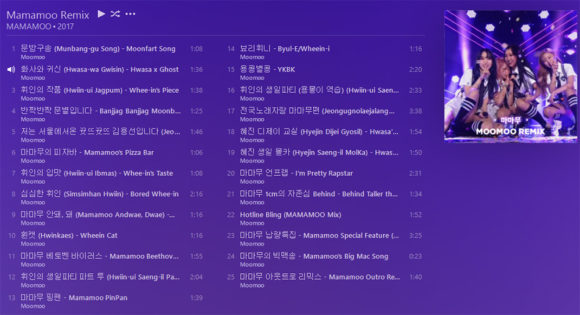 Also~~~ is anybody else smelling of low-key comeback? Whee-in was just asking for a Hwasa Lion soundbite. What if… they release a troll album O_O with Sleeping in the Car as lead single xD