In my case, I made the list and listed them by last name, but you’re more than welcome to rank them all. 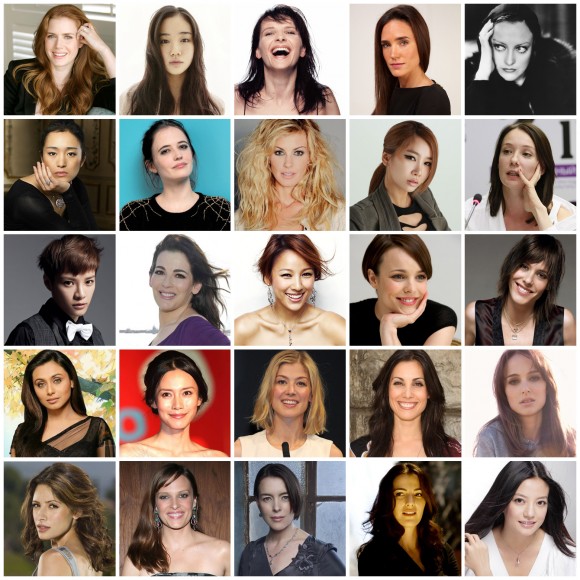 In women I prefer them with dark hair, even when they’re known for their lighter hair (in the case of McAdams), and sometimes I prefer them on screen as I found it difficult to get photos of them that I liked. And looking at the photos all together, they seem to share similar traits, like their cheekbones and the shape of their jaws.

Also, for a moment there, I thought I might see a LOT for eyebrows thing going on.

Flavors of the month… Rosamund Pike and Vinessa Shaw. In fact, Rosamund Pike came in at the last minute replacing Paula Patton, because I’ve only ever seen her on Precious and that Mission Impossible movie.

You can’t tell from photos, but apparently, I like raspy voices. Except for Adams and McAdams, but I like it when those two are mean.

I still think Kate Moennig is a The L Word thing.

Without counting Misster Chris and Crawford’s age, my average is born in 74.70… so my age average at this moment is 38. Tell THAT to 10-year-old me.

In the case of the guys~ 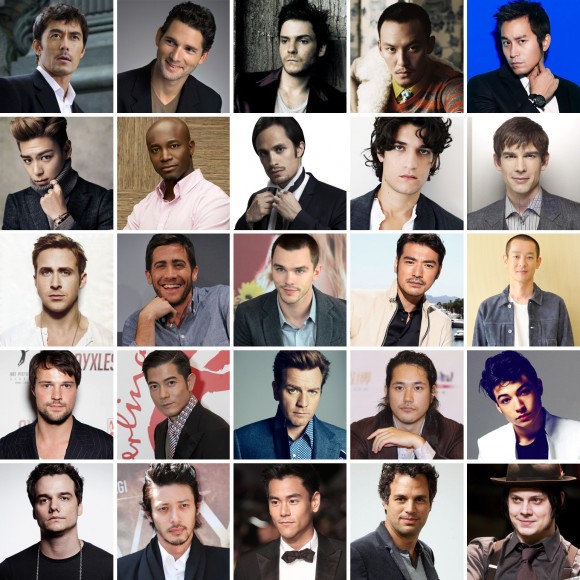 First of all, OMG – Ezra Miller is a 90s BABY. At this point in time, it feels totally wrong… though I’m sure I won’t feel as guilty in five years, with time these six years of difference will be nothing. I also got bigger age gaps to deal with.

My year of birth average in the guys is 77.28, so my average age at this moment is 36. Though the variety of ages in here seems evident… from people like Abe Hiroshi to Miller. I’m also trying to see some similar characteristics, which for a moment I thought was going to be another eyebrow thing (see: Joseph Chang and TOP).

And I still can’t explain Jack White to myself.

There are maybe some jawline similarities between Bruhl, Gorham, Gosling, Kozlovskiy, Kwok, McGregor, Moura and Odagiri. And I can see Moura and Ruffalo looking similar, just like Matsuyama and Kaneshiro. Except for Odagiri and Kase, all the Asian guys that I like tend to be darker. And Chang Chen’s head is similar to Hoult’s. I know, I’m grasping.

Flavors of the month… Ezra Miller, Nicholas Hoult and Danila Kozlovskiy. Except for Danila, the other two came at the last minute replacing Hayato Ichihara and Daniel Henney because I haven’t seen them in a while.

I like deep voices, so I have no place for the likes of Justin Timberlake or Adam Levine.

5 responses to Current Flavors and Getting Your Type