Once again… pimp the fandom!
subscribe! and send your own If Only! 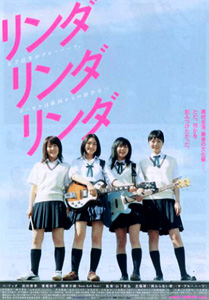 Synopsis: Three days before their high school festival, a group of girls is forced to recruit a new lead vocalist for their band. They find Son, a Korean exchange student, whose Japanese comprehension isn’t the best, but that will do.

In a race against time, the group struggles to learn three new tunes for the festival’s rock concert, including the classic by 80’s punk pop band The Blue Hearts called Linda Linda.

I gotta tell you that I’ve struggled on who to replace, I even re-watched the film tonight! I ended up replacing Yu Kashii’s Kei, even though I have the suspicion that Aki Maeda’s Kyoko could be more suited to Yu Aoi’s understated acting.

There’s a rumor, a rumor since I haven’t been able to confirm with any other source, that Yu Aoi was supposed to be part of Linda Linda, but had to back out at the last minute. This is why Linda Linda is PERFECT for “If Only”. Why? Well, Yu already had the chance to work with Nobuhiro Yamashita on Camouflage… but that could have happened sooner. Also…. why miss the chance to see Yu playing the guitar WHILE singing Linda Linda at the top of her lungs? Not only at the end of the film, but also on a music video! Because the girls released an EP as PARANMAUM with the three main songs (and some others), so why miss that opportunity?

On my decision to pick Kei over Kyoko, well… Aoi (for the sake of not calling both actresses Yu) is often cast as the passive character who always reacts to stuff happening around her. This is the case of Kyoko, as a character, she plays the drums, is never on time for rehearsal and has a crush on a schoolmate, but is too shy to ever be forward with it.

Then there’s Kei, she’s short-tempered and seems to have an attitude. Her conflicts with the original lead vocalist is what puts the group in the position of choosing someone else. Kei also had a relationship with an older guy, and seems vulnerable enough when we touch the subject.

In short, I just want to see Yu playing someone short-tempered and with an attitude – not everything needs to be kawaii, you know?, even though this movie (at least for me) was all about Doona Bae.

Also, love that scene where Bae’s character Son tells her suitor (a very awkward Kenichi Matsuyama) that it’s not that she hates him, she just doesn’t like him. She just wants to be with her friends. Aw! Chick flick all the way!