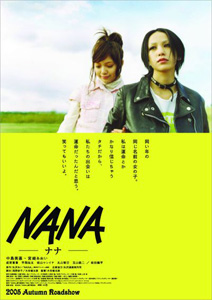 Synopsis: A chance encounter between two girls of the same name, “Nana,” triggers a series of events and relationships.

For me, Yu and Aoi Miyazaki are very similar. Besides being the same age, both are cute, innocent/young looking, and have great dramatic and comedic talents. It’s no wonder I can visualize Yu in most of Miyazaki’s roles and vice versa. The reason I picked “Nana” is because it was such a huge box-office success in Japan and it would be great for Yu’s career if she starred in this film instead of Miyazaki. I don’t want to take anything away from Miyazaki….her portrayal of the Manga character is praised by many. I would just like to see Yu take a stab at it, that’s all.

If Yu would have landed “Nana”, then she would’ve had two box-office hits under her belt…the other being Hula Girls. And when your movies make a lot of cash, then the good scripts start coming your way!