Hmm, it’s been half a year almost since my last talk on Films that Changed your Life Forever~~~ I took a while, because I couldn’t pick a film… and I wanted to pick one that had some significance. This is why I picked Whale Rider! I even kept the ticket!!! 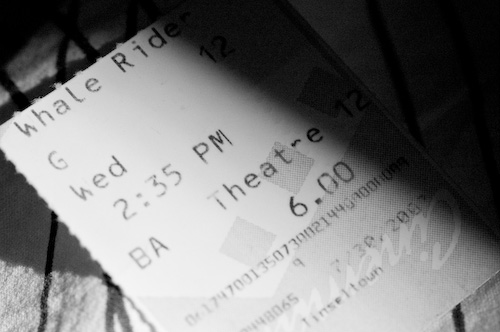 It was the end of July of 2003… summer. I had been in Canada for a few weeks, and classes had ended for the day. My mom had gone back to Peru, and I was for the first time living away from home. *sighs* Oh the memories…

I loved Tinseltown… I like Cinemark – unlike here in Lima… haven’t been to a Cinemark theater for 3 years. Anyway, I went to see this because my cousin, whom at that time was living in Hawaii told me to watch the film as Maori culture was very close to culture in Hawaii. 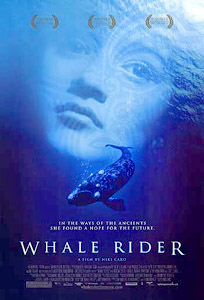 What I think was great about this film, is that I could relate to Pai (a very young Keisha Castle-Hughes), and that very much like Pai was close to her grandfather (Koro, Rawiri Paratene) ~~ I was close to my grandfather too.

I grew up living with my -at the time- only-living grandparent… I was pretty much the only grandkid who could understand his Span-ese (or Chipañol), thus I’m fluent in Chinese-Spanish. hahahaha~~~ Anyway, because of that relationship… I was reduced to tears on one scene of the film.

A long time ago, my ancestor Paikea came to this place on the back of a whale. Since then, in every generation of my family, the first born son has carried his name and become the leader of our tribe… until now.

You see, Pai (a girl) was supposed to be this generation’s Whale Rider… the one who would lead the tribe into this coming years. The community, and Koro in particular, were expecting the birth of a baby boy. Sadly, the boy died at birth, and the only surviving twin was Pai. Her dad also chose to keep the boyish name Paikea despite Koro being all grumpy about it.

Growing up, Pai lives for her grandpa… and she’s capable of doing many things that other boys can’t, which ticks Koro off. She ought to be acting like a girl, and leave the boy stuff to the future Whale Rider~~~ what Koro hasn’t figure out yet is that his granddaughter may be the next ‘the one’ despite her sex.

The film takes its most dramatic turn when Pai invites her family (including Koro) to her Maori cultural performance, and when Koro is about to leave home… the whales arrive, preventing him to attend his granddaughter. This incident, which later turns into the tribe’s discovery that Pai is in fact the new leader, makes Pai think her grandfather doesn’t love her, and as she gives her heartbreaking speech about Koro, breaks down and cries… you do too.

That scene is the reason I chose this film for this post. I somewhat felt the same when it came to my grandfather. Thinking about him still makes me sad, even though it’s been nearly 4 years since he passed away on my graduation day. Last year, during the Olympic Games opening, I took out his photograph and put it in front of the TV so he could watch it, feel proud of it. *sighs* I wish I had seen him one last time before he passed away.