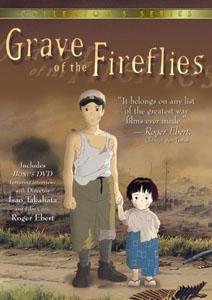 It was (most likely) the summer or fall of year 2003 when I went nuts about DVDs, I mean literally. I went every weekend to the store, to either rent or buy… if it was a visit to Blockbuster, I would rent… but I would usually end up at Virgin Megastore, back when it was still Virgin Megastore and not HMV – Anyway, it was one of those weekends~ I was browsing the DVD section downstairs, when I was attracted to this DVD (see the cover on the side) – a boy and a little girl. I bought it.

Nutz, eh? Well, I went home, watched it and LOVE it. Love at first sight!

I would probably tell you it’s THE saddest animated film I have ever seen, mainly because it’s more like a film than many other animated films I’ve ever seen. There is a shot-for-TV-movie version, as well as a Live Action film, which I dare not to watch, LOL’ – I FEAR them, but AM curious.

Anyway, when I saw the film, I CRIED like there was no tomorrow. Alone in my silent room, with the DVD playing on my laptop computer, holding my pillow, HA!

I felt sooooo much for Seita and Setsuko, and their relationship as siblings, with their family, and the loss of their parents in World War II. However, it may not fall in the cut-your-wrists kind of drama… not a knot in the stomach, but a feeling of sadness and nostalgia? Of knowing what’s to happen, and crying of relief maybe? I think it’s probably a VERY grownup film, much more mature than many ‘normal’ films people that say don’t watch ‘animated films’ because… “those films are for kids, no?” – UGH.

I have seen Grave of the Fireflies close to 12 times, maybe even 15! It will probably get more views if I could find it playing on TV, but that’d be a bit difficult since it was released in 1988. ^^

I google some posters and covers of the film…