It’s been a LONG time since my last talk about films that marked my life, and after much thinking and procrastination I thought Karate Kid should be next. Why? 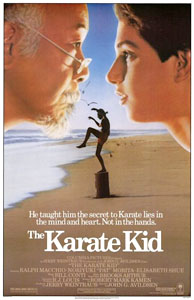 Mr. Miyagi ROCKED with his “Wax on, Wax off” in English, and the classic “Encerar, Pulir” in Spanish. Yes, I still own my Karate Kid band. And yes… I quote still Mr. Miyagi from time to time on regular real life conversations. My parents also quote Mr. Miyagi, so it’s all there, you know?

This is why I think the idea of the remake should be a big NO-NO. It’s not because Will Smith’s kid can’t play his own version of Daniel-san… NO. It’s because it will be tough to find a Mr. Miyagi. LOL’ I mean, even Pat Morita got an Academy Award nod for his Mr. Miyagi… xD There will be no way someone else will be able to say “Wax on, wax off” and make it a classic.

Actually, I even have an attachment to the Spanish-dub of Mr. Miyagi… LOL. Figure that one out, so even that matters! Sometimes I even try catching flies with my chopsticks, but you know… it’s futile. Impossible… plus I would have to wash my chopsticks again. xD

Sometimes I still try to do the “Crane Kick,” but am getting older… I feel my leg trembling easier, but I still pretend. xD

2 responses to Karate Kid – Films that Changed your Life Forever