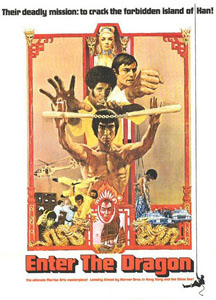 I used to say those lines over and over when I was little. Yes, I was a bizarre kid. I also used to *imitate* the beginning fight with Bruce Lee and the chubby fighter!

Don’t think. Feel…
It is like a finger pointing to the moon… xD

The Spanish dub for me is a classic, ha! I always laugh when I remember the Old Man had a Spanish-Chinese accent. “Debo contalte soble tu hellllllmana” xD

There are so many memorable scenes from that film, like Ohara’s martial arts video demonstration, the cocky contestant that gets to try Bruce Lee’s Fighting Without Fighting technique, the introduction of Bolo! The apples with flying daggers~~~ Han and Bruce’s mirror FIGHT! THE MIRROR FIGHT!!! I used to get SOOOO scared and excited over it xD Well, I still get goosebumps from it~

Apparently I was a 4-year-old watching an R-rated film, where er… there was female nudity, some bloody scenes, suicide to… save your own life? And female… entertainers? xD Okay, courtesans? xD

I also played with my dad’s nunchucks, and there was this wooden-snake that my cousin bought in some trip, and I used to use my pillow case like Bruce Lee with the snake on the secret entrance. HA! Moreover, at the beach, I would use the sand as the people in Han’s island with the toasted pebbles and such~

And thus, my life was deeply marked by this film… and will always stay in a special place through it.