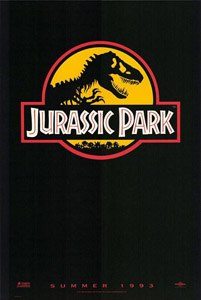 Jurassic Park made a huge impact on me. Mainly because I saw it as a kid, and was amazed after the theaters that 1. I had a nightmare with a T-Rex… or more specifically, the eye of the T-Rex. LOL and 2. I wanted to be a paleontologist for at least 3 years of my life. Because of Jurassic Park and those scary Velociraptors I went to see Jurassic Park II three times at the theater – hahahaha.

But come on, you can’t hold that against me. After all, I also watched Jumanji twice at the theaters.

I think those were some of the factors that made me want to get into 3D and Special Effects – You know, since I was also blown away by Michael Jackson music videos xD. I think it was that first scene in which you see the Brachiosaurus coming out of the lake with the amazing John Williams piece. It’s just magical, almost like you were actually in the film because they saw something that didn’t exist right there, and we saw something on screen that was never before~~~

Of course, now I know very little about dinosaurs because I’ve forgotten everything that I studied. I only faintly remember about Sauropods because I did my presentation on them when I was like 10 years old. So it all is just a faint reminder that I once was a Dino-kid xD

Then jump years ahead, when I was about to finish school, I told myself “maybe I should study visual effects and 3d, that way I can learn many things about many other stuff.” – I think that was the year I saw Kevin Bacon’s Hollow Man. LOL’ So I was like… I can study biology, or paleontology, or anything that I would be working on. That’s totally an interesting job, right? Well, I don’t have to tell you that I didn’t end up majoring on visual effects xD

But still! Jurassic Park is a memorable film, with memorable moments. Just ask my cousin, he knows the lines even though he was like 4 when we saw it at the cinema. From that very first scene you see them coming out of the water, to the first time you see the Triceratops, or the “fateful” power outage and the T-Rex playing with the Jurassic Park cart, the eating of the lawyer, and the Velociraptors who can open doors and chase after you in the kitchen.

6 responses to Jurassic Park – Films that Changed your Life Forever