*hoot hoot* sorry for the little delay~~~ But here we go!

As always, a little about the film:
This 2005 film stars Yuya Yagira (Tetsumu), of Dare mo Shiranai (Nobody Knows) fame – a role that earned him the Best Actor award at the Cannes Film Festival – as a young man who wants to become the first Japanese elephant trainer.

Spoilers ahead, and I mean it this time. 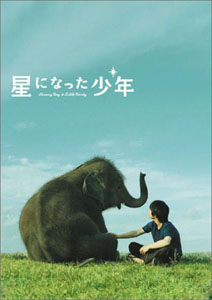 Shining Boy & Little Randy makes for a decent family film, especially if you like animals. Though the film seems longer than it is, it has enough cute moments to keep you interested… I think the elephants scenes are the ones that I enjoyed the most~ xD THOUGH, the ending is not really happy…

Anyway, if you’re in because you want to see Yu Aoi, she appears after the first half of the film, and only in four scenes. She is not a major character, though she is credited in the main actors. I’d be more inclined to say that this is a very prominent cameo. She plays Emi Murakami, though I don’t think she ever mentioned her last name on the film… nor her age, which is mentioned at the back of the dvd. Emi is supposed to be seven years Tetsumu’s senior, which I don’t think it’s ever hinted at… but okay, I can buy it.

You see, the film is quite faulty, but Yu makes do with what she’s got. Her character introduction, which happens at the local fare, and makes Emi seem like those animal lovers who are very easily affected by what happens to animals. However, a talk with Tetsumu is all it takes for her to realize that she must not underestimate animals. He seems smitten by her (it’s hard not to be, non? LOL), and asks her to visit his family’s zoo, you know… as in a date, which she gladly accepts.

It was odd to feel attached to Tetsumu, and the jumpy pace of the film didn’t help with that either, so by the end of it, I felt quite disconnected. There are two things that I didn’t get… by the end of the film, when Emi is talking to Tetsumu’s mom, she knows who Emi is… as in she knew that Emi and her son were a couple. If they were a couple, how come she wasn’t shown during the funeral procession? And the other thing that I don’t get is how Emi got Tetsumu’s drawing, which was thrown by the math teacher through the window at school.

Also, I can’t help but think that this last scene was the preparation for the last scene in Rainbow Song. XD – Talking about all sort of love revelations~~~

Favorite Scene: I’d have to say the bit after the ‘dead’ flamingo’ incident, while meeting Tetsumu… though I can’t stand Emi’s outfit in that scene. LOL I love how she says “shinda FRAMINGO” xD.