TOKYO! the 3-part-collaborative film by Joon-ho Bong, Leos Carax and Michel Gondry, has been (or will be) making rounds in theaters in Japan – I think. – And I won’t be able to watch this in a long~~~ LONG time, I’m pretty sure… but Hawaiian residents will be able to watch it at the Hawaii International Film Festival. [WTF? Louis Vuitton??] xD

Get tickets, and check! Coz schedules could’ve changed during the time of this post and the day of showing~~

If you are a Yu Aoi fan, and live in Hawaii… or don’t mind spending the airfare to Hawaii, LOL – Go for it! Yu Aoi is featured in the Joon-ho Bong (The Host) directed/written segment title Shaking Tokyo, about a man who stays in his apartment very much like a hermit, trying to isolate himself from society, until he meets a pizza delivery girl (Yu) and there’s an earthquake… apparently. 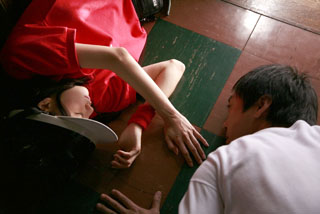 Also making the rounds at the festival will be Kung Fu Kun (aka, Kung Fu Kid), which in itself isn’t much of a film I would watch… it is kinda funny at the beginning. However, it’s worth noting that there’s a small cameo with Juri Ueno! [click for some funny screencaps] ~ so if you’re a fan of Juri Ueno, you can get tickets for it for the festival!