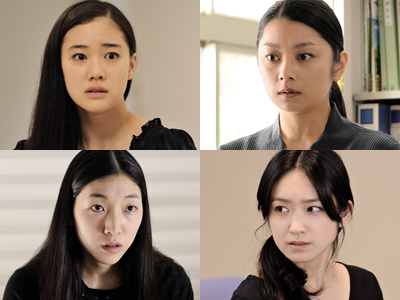 I hope everyone is as excited as I am.

First… of course, I love Yu-chan. It seems like when my fandom is faltering, she throws a bone at me. LOL

Then… it’s a Minato Kanae revenge story. Kokuhaku wasn’t mind-blowingly amazing but it was pretty good, so I can’t complain from a revenge story about a woman who’s lost her kid and tries to get her now-grown friends to remember and seek atonement.

There’s also Kiyoshi Kurosawa, who directed Tokyo Sonata — which, you know… I wasn’t really as blown as everyone seemed to be with him. But it’s always exciting to see new people coming together to make projects. Especially since WOWOW is involved. I tend to like their off-beat dramas that get a lot of indie J-film flare.

Kyoko Koizumi — who has actually worked with Yu-chan in the play Gakuya — stars as the mom, and the four friends of her dead child are Yu Aoi, Chizuru Ikewaki (Josee, the Tiger and the Fish), Eiko Koike (Paco and the Magical Picture Book, Wool 100%) and freaking Sakura Ando (Love Exposure, 1).

The four women are being played by Aoi, Koike, Ando, and Ikewaki. 15 years earlier, when they were elementary school students, they had been playing with Emiri up until just before her death. They were the first to discover her body, and although they saw the culprit’s face, they were unable to remember it well enough to identify the person. As a result, Emiri’s mother (Koizumi) demanded that they find the killer, or else find a way to atone for themselves to her satisfaction. Now grown up, those women find her words coming back to haunt them as tragedy begins to befall them.

Lasting only five episodes, the drama starts on January 8th, 2012.

Hope a fansub group subs this as soon as possible.