Something about the film:
(From AsianMediaWiki)
Schoolteacher Hisako Oishi struggles to imbue her students with a positive view of the world and their place in it, despite the fact that she knows full well that most of them will die in the war. 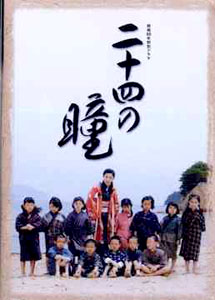 The film, or well.. TV Movie starts off with the Japanese soldiers who are off to war, and the woman who was once their teacher. She arrives to this town on a bike, wearing a western outfit instead of a kimono – everyone is sort of surprised, while many (if not all women) show their dislike for going against the norm, but Hisako-sensei is a good teacher to the first year students. She plays with them and treats them as almost equals, quite your perfect teacher/student relationship.

Years later, we see the students growing up and their developing relation with Hisako-sensei throughout the years, as war is about to start, as well as their deteriorating during war time, and ultimate death. It’s a downright depressing topic, which was the thing that called my attention, but somehow fails at it. Perhaps, it could be the lack of subtitles, but I’m more inclined to blame the script, the directing, music and editing that failed to take me into the story.

The bad thing about it is that it feels like a film made for tv, and there’s no way around it. I also felt the kids were somehow miscast, as many didn’t look like their grown up version, and others just overacted a LOT.

In case you’re in for Yu Aoi, she shows up three quarters into the film, and just for five minutes tops in a quite dramatic scene that somehow either prepare her for Mushishi (almost, kinda), which I’ve reviewed a while ago, but haven’t posted yet – as well as Yamato… which I’m still supposed to review.

Favorite Scene: If you must know, there is only ‘that’ scene… so can’t really spoil it all.

Couldn’t find any images, so I’m taking the time to do some captures.