The Twilight Samurai is a Great On-Screen Romance

I think it was time to refresh The Twilight Samurai in my memory. It hasn’t been long since I watched the film for the first time, but it somehow began blending with The Hidden Blade. Admittedly, I wouldn’t have minded a sugar-coated ending of  “they lived happily ever after”  in which they didn’t say “it was only 3 years until…” but I’ll take it.

The Twilight Samurai is one of those films that remind me of great Hollywood on-screen epic romances like… you know, Gone with the Wind, Casablanca… but you know – Japanese. It tells you the story of this man who’s lost his wife to consumption, has two little girls and a mother who can’t even recognize her own son. The other samurais talk about him because he smells even worse than dried codfish, his clothes are torn with no one to mend them for him, and no time to go out drinking and ogling at women after work.

Poor Seibei Iguchi is a social outcast with no money and no life outside of his home-life, but he doesn’t care. He doesn’t begrudge other samurai with better jobs, more status, all Seibei wants to do is have enough to take care and be with his daughters, and his mom. His uncle suggests he marries a not-a-beauty to get some weight off his back, but Seibei is so good that he finds it insulting to him and to the lady.

Then one day, talking to his friend Iinuma who tells him that his little sister is back home after a failed marriage to a mean-drunk who abused her. Iinuma’s little sister, Tomoe, used to be childhood friends with Seibei. 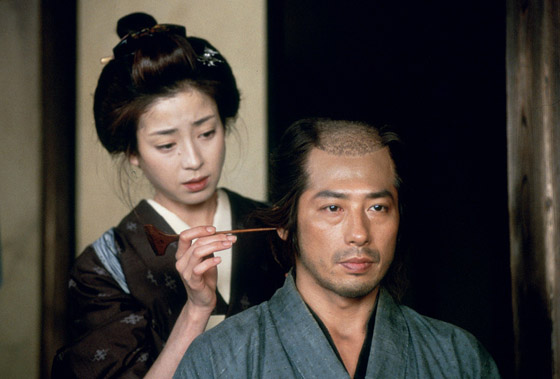 It’s thanks to Hiroyuki Sanada and Rie Miyazawa’s acting skills, as well as their chemistry that made it work. You know, the moment you see them interacting that they’re supposed to get together, but you don’t know how. However, when you think it’s the right time, right after Sanada’s monologue on how he’d been thinking about her since that day, and you think everything is finally in the right place — Miyazawa’s line-delivery could almost break our hearts, as it does hers… right after Seibei’s mom doesn’t recognize her.

There’s a wonderful thread on IMDb — surprisingly — about some of the symbols in the movie, though they seem more fan-spottings… there are some great moments.

– Ito narrates that “It was almost as if the house was brighter as soon as Tomoe came into their lives” In the scene you see a strong, warm, setting sunlight shining through the door on to the entire family thus literally and visually reinforcing that metaphor. Then immediately shows a lantern flickering as a segue into the next scene. And then a third time to segue into Seibei and Tomoe walking home the scene starts by showing the moon (also source of light). Thus equating the Tomoe = light = happiness imagery.

– As you see Seibei practice his katas at night for the next day’s duel with Zenemon that is really the only time that you see the Twilight Samurai embodied. Quite literally illustrating a Samurai by Twilight.

– Continuing the Tomoe is light theme, while Tomoe represents light and happiness, Seibei represents darkness, or rather twilight, characterized by struggle mingled with sadness due to his situation. So the two characters complement each other and can be seen as complete when put together. It suggests a cycle, as day is to night and happiness is to sadness. And just as with sunrise and sunset, the time at which darkness and light meet, their time together was short.

As you probably know, I love Harmony and the concept of opposites complementing each other. To me, him returning home and finding out Tomoe stayed at his place waiting for him it was a very romantic gesture, one of those things you don’t normally see in films any longer. Tomoe gave up her marriage proposal, she stayed with his girls even though she didn’t know if he’d be back or not. My heart literally skipped a beat when I saw her coming out of that house.