What’s a shipper?
According to Wikipedia, a shipper is a person intellectually or emotionally involved with the development of a romance in a work of fiction.

Ok, since I got that out of the way… the first time I heard the term was probably when I got really into Harry Potter, just after reading book5 in the summer of 2003. I’m a Harmonian, and proud of it! I can’t talk about shipping without mentioning Harry and Hermione, bless their fictional souls. It was nuts that summer, reading and creating my own fanfiction… looking at fanart, and embracing other Harmony shippers – thanks to Harry and Hermione, I was introduced to the world of shipping and friends. lol’

Now, that I’ve sort of moved on from Harry Potter (I still support Harry and Hermione, though) – I’ve moved on to other ventures, lol’ WHICH brings me to Sholly.

What’s Sholly?
Sholly is (though I dunno ‘the official’ name) the name fans have given to the pairing of Shane McCutcheon and Molly Kroll in the Showtime drama, The L Word.

Sholly, I know xD sounds kinda weird… but kinda cute, sort of an odd mix. Sounds like a cuter ‘chola’ lol’ softer, and cutesy. xD But what’s so good about Sholly?

Shane, throughout the up and downs in the melodrama of the show, has somehow kept me hoping of a turn-around. Shane, since season1, has been the player. She fell for Cherie (?) who ended up breaking her heart, but Shane was who she is… moved on to the next meaningless shag, and by the middle of season2, we could see her with Carmen. They even moved in together! (I’m trying to skip all the drama here) – and Shane felt the pressure for taking the next step, so she proposed… despise her player player nature, which resulted in the not-a-wedding (because Shane screws it up). Then came the brief relationship with Paige, who was the mom of Shane’s lil’ bro’s friend… Shane seemed to be more eager to take the next step, and decides to move in with her… to just end up screwing it up, again.

This brings me to where we all stand now. Season 5 introduced Molly, the daughter of Shane’s friend’s boss. Also, Molly is straight and let’s Shane know that. She is also smart, strong and an independent law student, and she seems to be in control for a while not succumbing to Shane’s charms, which always seem to work with every living girl on the face of the earth.

For the first time in the 5 seasons of The L Word, I’ve felt giddy about a pairing, lol’ And I actually have gotten ‘gifts’ from this relationship (unlike my frustrated nature with House M.D.’s Huddy pair… which is sure to happen, but I doubt it’ll give me scenes like Sholly, lol) – Molly and Shane hooked up in a nervous and sensuous encounter during a blackout, making a 15 minute sequence of pure smut (in a mash up of various pairings with their respective encounters)… literally. LOL’ Anyway, they had a fight and got back together in the cutest possible way I’ve seen making up on the show.

The phrase that started it all:

And Molly’s make up monologue 1:

“No, it was great for me [referring to the terrible sex Shane said she had]! You don’t just get on a bike and know how to ride it, same with riding a girl. So I freaked out! Big deal!! You’ve just been with so many girls, you don’t remember your first time! Well, guess what, it was my first time! And it was great! It was better than with Richard, than with guys and with anybody and I’m really into you. And I swear next time I will SO go down on you!!”
Molly, played by Clementine Ford 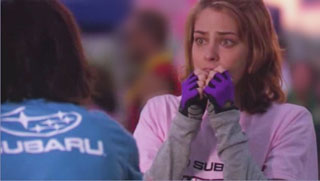 “I’ve never flown to the Pacific North-West to chase a girl I barely know, and I’m here, and I’m really crazy about you. And I need you to give me another chance, even if I’m AWFUL in bed. I know that I’m still Gay 101, but I’m a really fast learner, and before you know it I’m going to be Advance Placement Gay, and Graduate Level Gay. And fuck Law School, I’ll get my Doctorate in fucking Gay.”
Molly, played by Clementine Ford 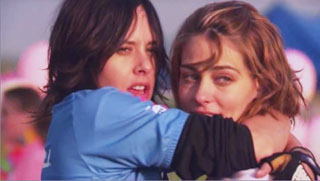 Ok, that’s enough of Sholly for me. Let’s hope they get an open happy ending for the final season. ;-) And maybe rename the ship as “Holy Shmolly!” Hahaha, or Moaney (as in MOll-shANE-Y)… or! The Spaghetti Ship! LOL’ How about that? Those three have been nickedby Amy! LOL’ credit where it’s due xD