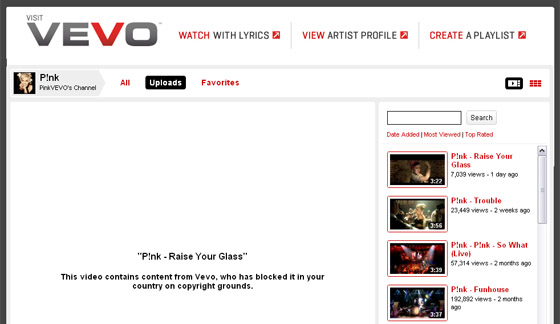 What’s the point of a “video premiere” online if you’re gonna be blocking content by region? And it’s not like we can’t view the video from Pink’s official website, right? I mean, to put it in words~~~

Pretty much anyone outside the US, can’t see Pink’s Raise Your Glass video. Not helping with view counts, let me tell you. And it’s not like it’s Pink’s fault. I’ts not the artists fault… it’s the record company… and VEVO for teasing — making us belief that when clicking the link, we will be able to see, but giving us that “blocked content” message instead.

Sony, stop sucking the fun of the internet.

Anyway… about the video? I like Dave Meyers, he’s fun. He works fun times with Pink, but I don’t love the video. Sure, I’ve replayed it more than five times already since it premiered, but that’s mainly because I want to sing along to the song.

My favorite moment of the video is Dork Pink who’s “too school for cool,” but that bit where it goes too much PETA. I don’t like PETA — I used to when I was like… 15, but you know? I grew up — I know Pink is an animal rights supporter, I know she’s worked for PETA (dunno if she still does), and I respect her opinion on those issues.

But with a song about raising a glass, I was expecting a lot more Freak Party. People jumping up and down raising their arms up in defiance… with a lot more people that looked like the people in Christina Aguilera’s Beautiful. “Darker” characters, but I guess that’s the difference between Dave Meyers and Jonas Åkerlund.