First day of Wildground’s 2010 Japanese Film Blogathon for everything about J-Cinema. Check out everyone participating around the world!

I had a bit of a problem picking my topic for today, because I mainly talk about idols that act. However, I thought I would dedicate my first post to the first ever director I saw since my craze for J-Films began.

Why I Love and Hate Shunji Iwai 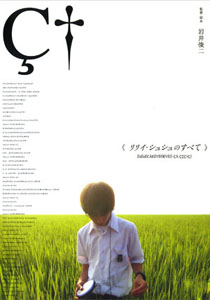 The film that got me hooked to J-Films was a little film called All About Lily Chou Chou, and I saw it illegally because I saw the poster on this website that I had visited for the first time… and I just had to see what this movie was about. The poster was oh-so-pretty with the white, and the rice paddy.

All About Lily Chou Chou made me feel sick the first time, but I was enchanted with the visuals, and the haunting soundtrack. Since then I’ve become a fan of not only Iwai-san, but also Salyu, and Yu Aoi… and to a certain degree, Ayumi Ito. I have watched and re-watched the film, and “absorbed” the film and style more each time.

Then I got anything that I could get by Iwai-san. Love Letter is the quintessential romantic drama, and his quiet style and visuals became apparent. Hana & Alice captures the point of view of teenage girls so perfectly, and that final ballet dancing sequence remains a favorite.

His shorts Undo, as well as Picnic show a certain bizarreness and sadness that paved the way to Lily, just as much as his short April Story paved the way to Hana & Alice… While Swallowtail Butterfly caught me completely off-guard, I loved it still.

By the time Shunji Iwai was announced as one of the directors on New York, I Love You — I was already a fan, and went nuts at the idea of having new Iwai material. However, I was disappointed with the casting choice of Orlando Bloom, and Iwai’s short wasn’t even on my Top3 favorites… disregarding how lukewarm New York was received by audience and critics alike.

Besides working as a director, Iwai has written all his films, and has written films for others. I watched Rainbow Song about the same time as Lily Chou Chou, without noticing Hayato Ichihara and Yu Aoi were both in both films, so I never doubted to catch the films Halfway and Bandage [1]. However, they both left me greatly disappointed.

With the recent work by Iwai leaving me on the edge of being a mad fangirl, I almost had a stroke when I heard that he would be reuniting with my favorite idol on an English-language Vampire film… shot in one of my favorite cities. I realize that the odds of it being a huge success are against it… having the “vampire craze” tiring everyone, being Iwai’s English debut… and his past weak scripts and poor casting choices… I just want it to be good.