I read a post about Polvos Azules in Spanish, that I thought I should translate into English and share. Titled Una Visita a Polvos Azules, by Edmundo Paz Soldan from ElBoomeran.com. 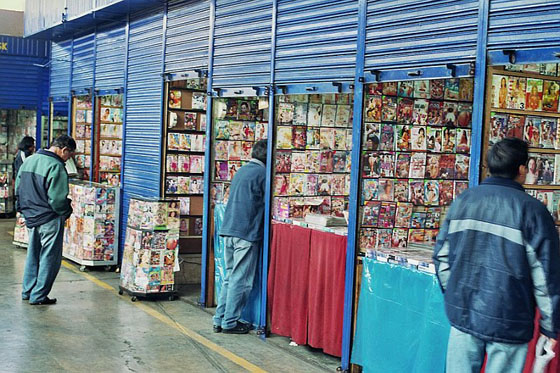 What is Polvos Azules, you say? Meaning Blue Dusts (as in numbers of types of dust). I’ll let Edmundo explain his experience here in Lima. Also, pointing out… it’s not like I endorse paying for counterfeit merchandise. LOL Just saying, and covering my basis.

A Visit to Polvos Azules

When I told my friend in Bolivia that I’d be in Lima for the Book Fair, some of them recommended the usual stuff -restaurants, bookshops, museums–, and some others told me to go to Polvos Azules. They knew I liked to look for hard-to-find films and told me that everything was there. Intrigued, I decided to follow their advise.

Polvos Azules is a shopping center, but not like any other. Here, almost everything you find is a counterfeit. I walked around the stands of brand clothing -Lacoste, Hugo Boss–, I was surprised by the quality of the products – there’s counterfeit and counterfeit–, everything for cheap. I searched for an iPod case, and I was taken by the stands that sold electronics, where young people with fast hands unblocked cell phones right in front of the customers. There’s abundance of errors and creativity: I saw, among them, sport shoes Pmua (Puma?) and power drink Duff (The Simpson’s beer).

Street money exchangers wearing fosforescent shirts pointing out they exchanged dollars and euros called my attention. The people in charged of Polvos Azules know that the place has turned into a touristic spot, and are willing to do everything in their power to make it easier for foreigners. The counterfeit commerce has been institutionalized (something that is, in someway or the other, happening in other Latin American countries).

For many years, the sellers in Polvos Azules had to fight against the alcaldia’s (city hall?) desire to fight illegal commerce. Some time ago, their stands were located near the presitencial palace in Lima, but when UNESCO declared it world heritage, Polvos Azules had to find another place. That’s how they made it to where they are currently located, near Paseo de la Republica, first as street market, and then as shopping center. When they couldn’t beat them, city halld decided to join them, or at least leave them alone.

The day I was in Polvos Azules, I felt my eyes itching and my throat was raspy. A seller explained to me that it was due to tear gas that the police force had thrown the night before. I asked if policemen raided the place to confiscate products. I was told that yes, but not because of city hall nor legal sellers, but on the policemen’s own accord, when they needed some money. Truth be told, in general, policemen just tried to keep Polvos Azules in order.

I went home with thirty films in a black bag and tears in my eyes.

And how about it? They also have a website??