Wannabe Distributor: Love Is Not Blind

I decided to create another feature in here~ The Wannabe Distributor feature!!! Combining my love for film and design, I’m gonna pick films as if I could afford the rights to distribute them, and imagining I really am going to be showing these films at a theater near me, I’m going to pick suitable titles and “create” a campaign to promote it. LOL

My first pick! China’s little movie that could, Love Is Not Blind (失恋33天). 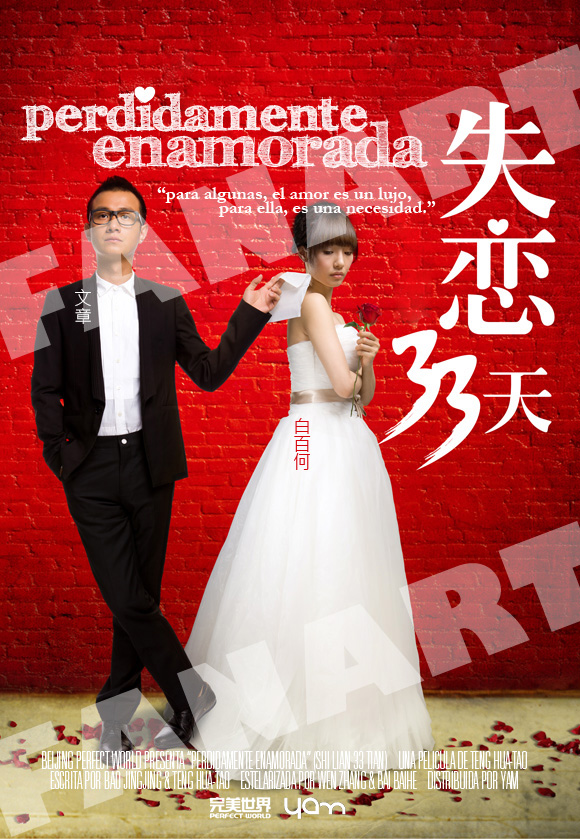 Sorry, I had to splatter that huge FANART not-subtle watermark… just in case. Haha. ANYWAY, the first problem I encountered was to actually PICK a suitable Spanish title translation. I’m not particularly fond of the English title of “Love Is Not Blind” so I was trying to find a suitable meaning to the original title in Mandarin.

My mother is rubbish at actually functioning as a translator LOL so she explained the title as “Lost love for days” — Apparently, in English, there’s such a word as “Lovelorn” meaning to be unhappy because of an unrequited love. We don’t have such a word in Spanish. And “enamorada de alguien que no te ama por 33 dias” (in love with someone who doesn’t love you back for 33 days) doesn’t seem like it’s such a good title. LOL

In the end I chose “perdidamente enamorada” and avoided the “33 days” part because it sounds super weird in Spanish. The title in Spanish can be read as “madly in love” but I hope it can also be read as “hopelessly in love” — meaning there’s no hope in her for being in love with someone who doesn’t love her back. LOL And that by the end of the film, people would understand how the main character finds her anchor in another type of love…

After all, Love Is Not Blind isn’t a typical romantic comedy. ;P

Next up! The slogan~

The original slogan in Mandarin was:

But I’m not sure if those two lines are connected… because if they are, I think the meaning it’s a little bit different. xD As it is, it seems to say “To love, it’s crazy. Not to love, it’s strong.” And I feel I kinda like it, but not in Spanish. LOL So I went with one of the things they said in the movie where they explain the inherent differences between Ms. Li and the main character (Bai Baihe) — while Ms. Li considers Louis Vuitton a necessity and love is a luxury, for our main character LV is a luxury while love a necessity.

THOUGH, I still feel it’s so misleading… because it’s really not what the movie is about, you see?

I would hope to have my female audience reinvigorated with the experience of watching this, though it’s not a movie where our heroine finds love… instead, she finds something else in someone she never really knew could be her rock.

What do you think of this section? Would you watch this if I had setup up my distribution company?