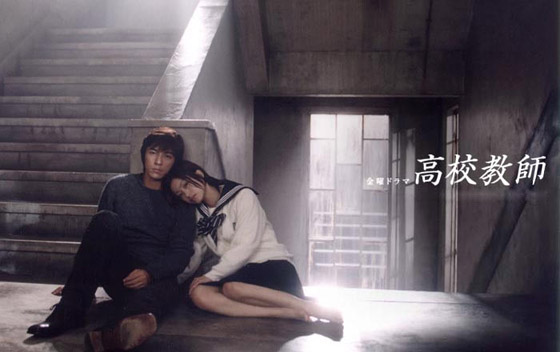 Besides the dragging storyline of the dying teacher who diddles the student who thinks is dying, the series talks about suicide, depression, prostitution, and bullying. The big bad of the series is Yuki, played by Hiroki Narimiya — whom I had already eyed on Tiger & Dragon, and Nana LOL — but his crazy antics get tiring by episode 7 too. I mean, he’s just bad because he’s bad, unlike Koike on Love Exposure who is bad for being bad with a background. 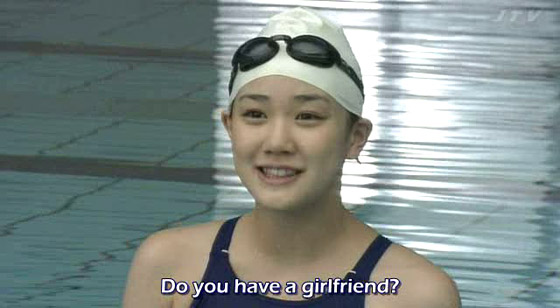 As for Yu’s character — Mami *giggles* — First time she appears, I thought she was gonna be the “seductress” so I went “wha?” but then she was kind of grown-up, and trying to get it on with the teacher — seriously, teacher wasn’t that hot… Abe Hiroshi on the other hand~~~ but then, that would be even more creepy, eh? — and then Mami *giggles again* was all nice, but then she went bad again trying to “play the game” but couldn’t get out, so now… she’s a victim. I wonder if Yu appears in the last 3 episodes.

The scene with the rape on episode 8 is short — blink for too long and you’ll miss it — , I thought she would have been more Ayumi Ito on Lily Chou Chou… fight back a little, but it was very helpless. But that’s more inconsistencies with the writing and script, than Yu’s characterization per se.

Aya Ueto is a decent lead here, she doesn’t anger me as a character because Mina is usually selfless, and there are times when she’s borderline adorable. Because diddling-teacher is lying to her all the time, you feel bad for her. And… another moment to roll your eyes, her character has no parents. She literally spends almost every hour of every day around teacher’s apartment. Stays the night, and goes in the morning, so they go to school together. Totally not creepy, eh?

Look, I love dark brooding characters [check Angel and Shane McCutcheon], but couldn’t really see a redeming characteristic in this dying teacher. Besides diddling the student he lied to, he’s so undetermined in the things he does. It feels he does it because the script requires it.

Anyway, the surprise of the series was Sonim (born Seon-im Seong), who may not really be a huge actress. I feel there’s something wooden and forced about her, but her character was the most interesting in terms of storyline. She was a bullied kid, but now she looked more like the one who would bully. She befriends Ueto’s character because they both wanna be “bad,” and in the end she falls for Yuki, who’s just using her for fun… plus her money, coz girl is loaded. She ends up quitting school, leaving home, and working in “the trade”. I’m waiting for a bounce back… going back to school, and fixing herself up.

Recommend it? Not really… unless you’re wiling to sit through 10 or 11 hours of this. What you will gain from it? At least if you’re a guy… Yu in a swimming suit — not Baywatch — and Aya Ueto has a shower scene. LOL Normal shower scene, nothing kinky… but you know, whatever suits your fetish.

For the girls? I dunno… if hot for dark broody teacher is your thing, go ahead.

Rated PG-13 for themes dealing with prostitution, depiction of minors smoking, and gang rape. It sounds like it should be more, but it’s not that strong… The teacher thing is more creepy than the short implied gang rape. Just saying.