Hi, Glee Quote of the Week, Glee is over for the season O.o

I think last night’s (real) season finale was a good sappy episode. I had a problem with the whole Quinn giving birth, as she was not sweaty or red enough, in my opinion… but I have never been pregnant, let alone given birth, so I’m just saying. The scene was quite funny though… and after having Puck peeking to the forbidden lands of down there during the birth, I doubt he will be getting laid any time soon. Anyone who’s seen any documentary knows. LOL

My second pet-peeve was the crying during To Sir with Love. I know it’s hard to cry while singing, but even Will had to look away from the line of the camera.

Anyway! The blogosphere is abuzz with this quote~ at least part of it. 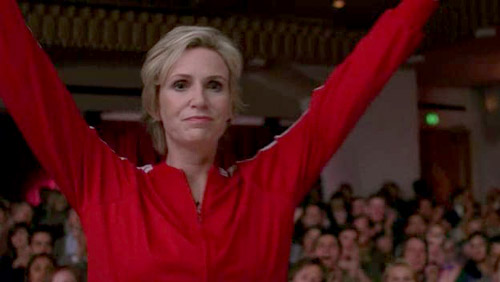 Announcer: She is fresh off her fifth consecutive National Cheerleading Title, and author of the soon-to-be-published memoir, I’m a Winner and You’re Fat, Ohio’s home-grown iconoclast, Coach Sue Sylvester!

I dunno if I would buy I’m a Winner, and You’re Fat… but I would totally read it.

One response to Glee Quote of the Week – S01x22 – Journey