If Only… Tokyo Trash Baby

This is Acerk’s last (and best) pick for Yu Aoi wishful thinking films. And I really did my best to stretch these picks as much as I could just to see if other fans would contribute their own. 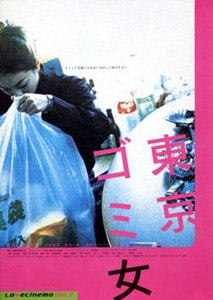 Synopsis: Instead of acting on her feelings for the scruffy musician who lives next door, Miyuki, a shy and lonely Tokyo waitress, settles for sifting through his trash, in the hopes that she can get to know him better by the things he throws away.

Tokyo Trash Baby takes the prize for being the number one film I wish Yu could have been in. I first saw TTB right after I discovered Yu and have always pictured her in the main role for some reason.

Yu’s got that innocent and shy persona down, but I know she has it in her to play a disturbed character and play it well. We got a small glimpse of what she’s capable of in Welcome to the Quiet Room, but unfortunately, her character was severely underused. There’s a scene in the movie that takes place in the bathroom where Yu’s Miki character reveals the reason why she doesn’t eat and her delivery sent chills down my spine!… seriously!

The character of Miyuki in Tokyo Trash Baby is obsessed with her neighbor and it leads her into doing some pretty bizarre things like going through other people’s trash. There’s one gross scene in the film and a couple of scenes that involve sex, but nothing explicit. If Yu were to play this role, I feel it would definitely broaden her opportunities in the industry and hopefully would prevent her from being typecast as the girl next door.

That’s the main reason I wish Yu were in Tokyo Trash Baby. I think her career would benefit from doing a film that’s different and more mature.

8 responses to If Only… Tokyo Trash Baby