Well, this is it people. I can’t hold it back any longer… specially with the latest announcement. I have to get this “If Only” edition done. In any case, other fans can still send me their 5 picks when they feel like it.

So here we go~ 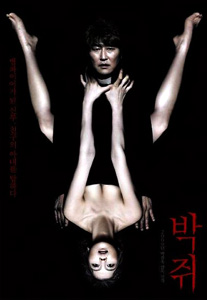 Synopsis: After a failed medical experiment, priest Sang-hyeon gets a bizarre blood transfusion that turns him into a vampire. When he finds out what he’s become, he fights off the urge to give into his newly-discovered animalistic nature. All hell breaks loose when he meets Tae-ju.

Second elephant in the room, how on earth can I get away with choosing this film if it’s all in Korean? Well, read me on~

This is a pretty normal film for Park Chan-wook’s standards… and it’s standard acting for one of the most known Korean actors Kang-ho Song. Ok-bin Kim is totally wicked as introvert murderous savage Tae-ju. I would have literally passed out seeing Yu playing a character like this. It isn’t the explicit scenes in the film – I really think the film could have worked well without them being explicit too, and made a less awkward viewing with my dadr – it’s how awesome it would have been seeing Yu play the introvert who can’t possibly stand up for herself to become someone completely animalistic… ready for the thrill of hunt.

Because the character of Tae-ju surrenders to all animalistic instincts, I could picture Yu playing a role intended for a Korean actress. It’s not like Tae-ju needs to have much dialog or big monologues, the genius of the character were the looks on her face, the heaps of breathe she took and the crazy laughing. I always though roles with little dialog and much more expression on big gaps of silence are so much more interesting. xD

Plus, it doesn’t hurt for popularity that it got released in America and seemed to be quite popular, earning a Best International Film at the Saturn Awards (for Sci-fi, Horror and Fantasy films). It won the Jury Prize at Cannes and was also nominated for the Palm d’Or.

6 responses to If Only… Thirst