If Only… After Life 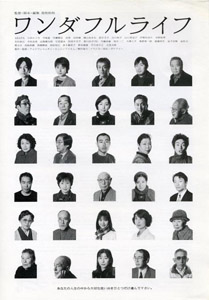 Synopsis: Every Monday morning, a team of advisors welcome in a group of people that has just died with the mission of helping each one of them to select their best memory that will last for the eternity in the first three days. On Thursday, filmmakers begin to recreate the selected memory, and in the end of the week they screen it in a movie theater and he or she moves to Heaven.

To put things simply, Yu Aoi in a Hirokazu Koreeda film is my ultimate dream project! Besides Yu being my favorite actress, Koreeda happens to be my favorite Japanese director, (along with Shunji Iwai) so you could see why this pairing would be so colossal for me. I picked After Life because its one of my favorite Koreeda films and out of all of his projects, it’s the only one that has a female character close to Yu’s age.

Let’s face it, Yu’s been in some pretty bad movies throughout her career. It would be nice to see her work with a quality director that’s considered by many to be the best auteur Japan has to offer.

2 responses to If Only… After Life