If Only… Cherry Blossoms

if you’re interested in sending yours, leave a comment.
thanks to all who have subscribed! xD check back often~~~ 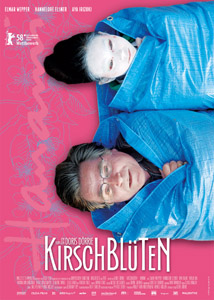 Synopsis: Trudi Angermeier has always wanted to visit Japan, where one of her sons lives, and become a Butoh performer, but her husband Rudi is reluctant to leave Germany. When she finds out that he has health problems, she suggests visiting their kids in Berlin instead, even though they don’t really care about their parents and are too busy living their lives.

The Angermeiers, in turn, decide to have their holidays in the Baltic Sea, where Trudi suddenly dies and Rudi’s life is thrown into the uncertain until he decides to visit Japan for her.

On this German/French co-production, Aya Irizuki plays a Butoh (butou) street artist named Yu that makes a connection with the character of Rudi when he visits his son in Japan. Obviously, because his son Karl is too busy working, and he leaves his father by himself for the most part of the day.

The Angermeiers’ kids in Berlin aren’t that much better, the new generation are spoiled brats that are asking about their video games. Their father, Klaus, wonders with his wife and Karolin, his sister, when the old folks will go back to their place because they obviously disrupt their comfy existences. When Trudi and Rudi ask if they could have a tour of the city, Karolin decides to dump them with her girlfriend, Franzi, who seems to be the only nice person to them.

So Franzi and Yu are the only two characters that seem genuinely interested in these folks. One of the reasons I would have liked for Yu Aoi to play this character is because it seems like it could be her cup of tea. Yu (the character) is a bit odd, but shows so much understanding to Rudi and helps him a lot.

I would have loved seeing Yu Aoi performing in full white-body makeup with the cherry blossom trees around her while doing her thing. The only thing would be the “speaking in English” part, since I have no idea whether Yu speaks English or not. In any way, nothing wrong with broken English this time around. Plus, the quiet moments and the sensitivity that she could have brought to the table.

3 responses to If Only… Cherry Blossoms