I was gonna apologize for not getting the time to write a new review, luckily I found that this reviewed followed next. Yay! xD

I have no idea where to put this since it’s not a film, but it’s also not a series. Sure it is, for some reason, labeled as a TV show or series… but no. It’s a TV movie, people. What is the difference between a film/movie and a TV movie, you say? Well, first it’s medium… then it’s budget and resources. In the end, you can almost always tell the difference between one and the other.

What’s this TV movie about?
Well… let’s see~ It’s a 2004 NHK Made-for-TV-Film about a high school girl named Nanako (Yu Aoi), who is often labeled as weird and anti-social due to trust issues with people caused by the betrayal she feels her dad committed. Seven years after his death, Nanako is thrown into the unusual situation to cohabit with her half-brother, Nanao (Yuri Chinen). 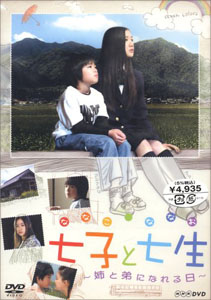 We begin with a simple shot of life in high school for Nanako, who apparently is just sitting in an empty class. Some dude is there bugging the life out of her (and me), enticing her to be more social, more open, and invites her on a ‘date,’ to which Nanako’s answer is interrupted by other dudes acting as if they were ten. Of course, she makes herself clear that she’s not doing anything and won’t be doing anything, and just storms out of the room… and apparently out of the district too, because she ends up running a lot. LOL’

We are introduced to Nanako’s current life situation. She lives with her mom (referred from now on as Mom), because her dad died seven years ago (Nana is also 7 in Japanese), and Nanako did not cry at his funeral. Furthermore, it is in this incident when we learn that her father had had an affair and another child, and worst of all this ‘other’ woman storms in the funeral and makes a scene. This other woman disturbs the room with Nanao, who is just a little kid then… but you know, it’s “uncool” by association. In most of our everyday lives, we would not accept anything to do with ‘the other’ woman or family, as seems to be the case with Nanako and Mom.

However, seven years later, Mom informs her that Nanao will be joining them for a little while, to which Nanako seems to take in a bizarre way because she seems upset bordering on indifference. When we are first introduced to Nanao (Chinen), I didn’t know whether I wanted to hug him or give him a “lapo” [Peruvian noun referring to the action of slapping/hitting someone on the back of the head] – He was one of those kids who you hate to love and love to hate. Despite my opinion, Nanako seems focused on not liking Nanao. You see, Nanao is just TOO chirpy in his greeting to Nanako who is trying hard to ignore the little intruder home~ LOL, as my dad mentioned, “she wants to laugh”.

Anyway, my heart begins warming up, just as Nanako’s, towards Nanao… who, of course, does laundry and cooks, and makes himself useful at home. You see, Mom falls sick and ends up in the hospital, so the kids need to take care of themselves. But you know, Nanako and Nanao are weird because they both have their issues, and when they finally find a middle point, the story takes its turn to a more family friendly piece.

The film has all the faults of a film made for TV in that it’s not tight (editing, acting, art direction, etc.) enough, and it would probably fit a lot more on a broadcast in PBS or Lifetime, than on HBO, but it’s good fun. It gives you a fuzzy feeling, and if you are attached to your family (are emotional or overly, for that matter) you will shed a tear or two. I know people who did, so no denying that~

Onto Yu Aoi~ This is a story starring Yu, so there’s lots of Yu for you to see. However, warning~ anti-social Yu is just a tad bit bizarre to see, but I think that could be the director’s fault. Like how bizarre it looked for the dude to kiss Yu’s cheek, that was just a weird scene. Best scenes with Yu are when she has already warmed up to Chinen’s character, like when she eats his cooking, when he eats her cooking, the birthday, and all the sibling bonding. Yu also does good ‘crying,’ particularly when she’s running with Chinen, and suddenly squats [sorry, couldn’t find a better term] to begin crying. But the best crying was at the end, when you only see the hint of the tear falling down.

Scariest part was when Yu offered/threaten to cut Chinen’s hair. LOL’ – It was kind of cute with all the running around… I have only ever let one friend to clip my hair, other than that I trust my hairdresser. Anyway, another part of the film that I liked was the explanation of Nanako and Nanao’s name, which perhaps it’s something common with Asian names. It’s something that connects the both of them from the very beginning… 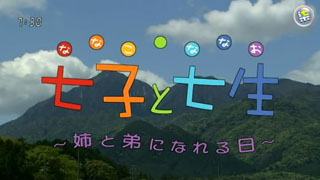 Nanako & Nanao – The Day They Became Sister and Brother.

The thing with the dad, maybe I’m not a good person… but I think it’s perfectly easy to begrudge Nanako’s father for leaving his family, but I get all the “You must forgive, and forget” thing going on… so I will let it go. Just don’t expect people in real life to act like Nanako’s mother, some people in the west might consider that low self-esteem… or just plain stupid.

Favorite Scene: Hmm, hard to pick a scene. I know I should pick the “Nanao is leaving” scene, or just the “Birthday cake” scene, and I’m gonna say the Birthday bit. However, I would also like to include the whole scene prior to that, when Nanako makes dinner and it’s too spicy, but Nanao says it’s better than he expected… all the way to the famous Birthday Cake.