I Watch Catherine Too.

Anyone ever watched the Franco-Canadian show Catherine? TV-5 Latin America shows it, and I was trying to get some info online, but there wasn’t much. (to read a post about it click here) 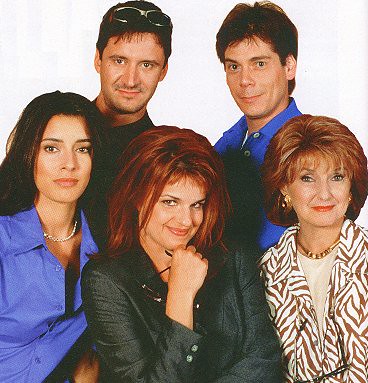 Catherine is a pretty funny show done in French-speaking Canada, by CBC. It stars Sylvie Moreau as Catherine, a sassy and wacky advertiser at Mirage-Image Agency. Alongside Catherine, we see her landlady, her ex boyfriend, the Chinese owner of the grocery, etc. Oh! and don’t forget about her freak-o-megalomaniac flatmate, Sophie (Marie-Hélène Thibault).

If you’re a non-French speaker, or most likely are an English speaker… you can sign this petition to get it on DVD.

Must NOT Hydrate and Have Sex in California

It seems water in California… or the US for that matter is ultra fertile, because everyone seems to be already preggers. It’s nuts! Planned pregnancies? Me thinks not so~ There are such things as condoms, and the pill… u know, loads of things to prevent you from accidental pregnancies. LOL’

This is the smartest move that Amazon.com can do for its users. (full article here)

We have received thousands of e-mails from Amazon customers around the world asking us when we will make Amazon MP3 available outside of the U.S,

We are excited to tell those customers today that Amazon MP3 is going international this year.

I can’t wait for it.

There were some good bits in some of the speeches for the SAG! Here are some of my faves~

My grandparents were actors in a time when actors were not allowed to be buried on sacred land, because they were homosexuals and prostitutes. So, it’s been a long way to come here, and that’s something we the actors should apply to ourselves.

If you’ve seen me on the show with Alec Baldwin, then you know it’s sort of like watching Fred Astaire dance with a hat rack. And after a while, you’re like, “Oh, that hat rack is pretty good, too.”

Heath Ledger gave it to me. [applause] In “Monster’s Ball,” that character that he created, it seemed to be almost like an unformed being, retreating from themselves, retreating from his father, from his life, even retreating from us, and yet we wanted to follow him, and yet we’re scared to follow him almost. It was unique. And then, of course, in “Brokeback Mountain,” he was unique, he was perfect. [applause] And that scene in the trailer at the end of the film is as moving as anything that I think I’ve ever seen. And I’d like to dedicate this to Heath Ledger. So, thank you very much. Thank you so much.

And if I’ve forgotten anybody, well, it’s just that I’m still in character.

The Screen Actors Guild award winners are in! Please throw me a film bone, SAG announcers!

Thoughts?
I’m so sad for Marion not winning, though Christie’s performance was moving… I’m still supporting Marion for the Oscar. LOL’ Come on! They showed the “Marcel! Marcel!” clip… that is like the best clip in the film, one of the longest scenes on the film and one of Marion’s finest!