Except for the mandatory appreciation for Boyhood (the Patricia Arquette show) and Whiplash, which had me contorting from all the conflictive feelings, I’m feeling rather lukewarm with this year’s award season as you can see from my 2014 Films Ranked compared to my Academy Award Watchlist. 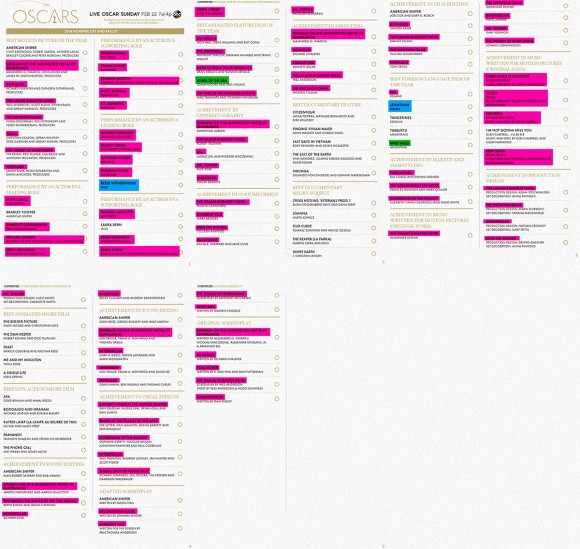 Hot pink is watched, light blue on to-watched queue, highlighted in green haven’t been found yet. My excuse for lack of documentaries and shorts is because of access. I find them extra difficult to get. Also, any respectable award show needs the presence of Haider. LOL And I could do a LOT LESS from Clint Eastwood. I’m not even one of those complaining for lack of women behind/in front of the camera, the nominees are just so damn BLAH! except for the few couple of surprises- some spice with Marion Cotillard (even though I don’t feel strongly about the movie), Ida and Mr. Turner in cinematography… and The Tale of Princess Kaguya.