I want to get over with this issue. If you visit the site, you already knew that I was going to add Yu Aoi to my list of Actors to Watch Until They’re 30, right? The issue here was which position I would place her… well, you’d be surprised to know that I didn’t place her on my #1, but she’s closed to it. She’s in fact #2 on my list based on the fact that not many people know about her outside the J-film watchers… but you (non Japanese film watcher) totally should. 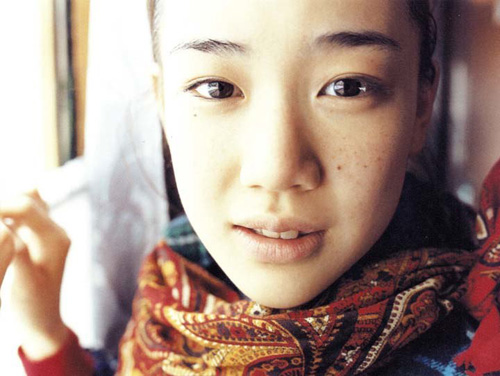 Also, I’ve had to write a small rectification in regard of the last YAM cover story titled “All About Yu Aoi” from people telling me it felt something I put at the last minute, and not written by someone who has been taken by Yu’s talent at all, barely scraping the surface and such things.

I’ve also been told that as an editor, I should have killed the story when it first failed – at the first deadline miss. I should have, in any other case I would have said to forget it, but I let it go on. So I apologize to all Yu Aoi fans, and to Yu Aoi herself (even though she’s not reading this, unless of course she is… in case, 「ヨ！優ーちゃん！」).

Whenever I read of someone discovering Yu Aoi in films like Shunji Iwai’s Hana & Alice, or as Hagu in the live-action adaptation of Honey & Clover, or as Isshouan’s okami in NTV’s Osen, they often mention how they can never get enough of her afterward. I’ve learned to call this phenomenon the “hit-you-in-the-face-like-a-meteor” factor. It happened to me, and it keeps happening to others.

But what is it about Yu that makes people from different ages and nationalities be drawn to her in the first place? At face value, the first thing you’ll hear is that Yu looks just adorable. Cute as a button, and sweet as pie… which isn’t bad, but it also takes a bit of the spotlight from what really is genius about her. Her acting abilities… and her choice of roles.

The kawaii-factor is a selling point, after all she is an idol in Japan… however that may work with her real personality, and her decision to take on a role. She’s mentioned that she’ll take on any role no matter how big the part is as long as the story is good, and that’s paid well until now. She’s played a suicidal teen on Shunji Iwai’s poetical dark school drama All About Lily Chou Chou, an empathic anorexic patient on Welcome to the Quiet Room, a shy art prodigy who says “arigatou” like no one will ever say it to you on Honey & Clover, a booty-shaking hula dancer on Hula Girls, the blind sister who knows it all on Rainbow Song, and the ballet-dancing student with a broken family on Hana & Alice, and that’s just because I’m listing the really good ones.

But there’s this thing about idols in Japan, they start really young – think Disney young, but perhaps a little less annoying – so by the time they’re young adults, they already have a filmography worth of an adult. Many of these young idols reach their peaks when they turn 20 (Momoe Yamaguchi retired at the age of 20) with phenomenal success in different fields.

Yu’s won several awards for Hula Girls – in fact, she was 20 going on 21~ so you see what I mean? If she were to follow the regular idol way, she could have decided to retire – *knock on wood* – but she hasn’t. She’s kept at it with some turns on a proper stage doing Shakespeare, and a few off-beat films like Yuki Tanada’s One Million Yen Girl, the international Tokyo!, and Don’t Laugh at my Romance for which she earned a nomination for Best Supporting Actress at the Asian Film Awards. That proves Yu has international appeal. Actually, I think she’s a Pan-Asian idol already. She’s hugely popular in Korea and Taiwan, as well as Vietnam and other South East Asian countries. It’d be kind of awesome to know if she’d be interested in being a worldwide known figure, but if she really truly wanted to, she’d just have to set it as one of those New Year resolution items and be done with it.

Anyway, if you are new to Yu Aoi and are really interested in more Yu photos and info~
check out the Yu Aoi tag and browse away.