Something about the film:
Quiet Room ni Youkoso is a 2007 dramedy telling the story of Asuka Sakura, a up-and-coming journalist who is trying to write an 800-character article, but one day wakes up and finds herself strapped inside the room of a psych ward. Inside, they tell her she had OD’ed, even when Asuka tells them it was an accident, they say she must go through mental treatment so she won’t do it again. During that time, she meets a few unique people that will or won’t mark her for the rest of her life…

Spoilers ahead, you’ve been warned. Really, these spoilers may ruin your watching… 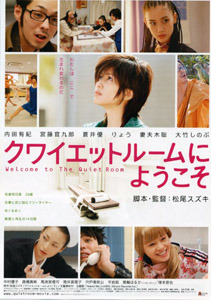 Quiet Room is the non-linear story of why Asuka (Yuki Uchida) ends up inside a mental clinic… or more accurately, a mental treatment facility. If you were to find its west counterpart, you could say Quiet Room is like a more bizarre version of Girl Interrupted, thing is… Quiet Room is more dramatic and much more hilarious than Girl Interrupted could ever be.

This film is really worth watching because of all the characters you encounter… I mean, Asuka is as normal as you can find here, I think~~~ First there’s Tetsuo (Kudo), Asuka’s butt-shower-Japanese-game-show-star roommate/boyfriend. He is really a star! You would wonder why, but then again I don’t get to watch his show. Tetsuo also has a borderline-retarded friend/assistant in Komono (Tsumabuki)… that’s all I have to say about him. LOL’

Inside the psych ward though, she meets an array of really picturesque (hint: hilariously weird) characters… like cyborg-esque Nurse Eguchi (Ryo), a hair-burning pyro (?), a calorie-burning-walker, a Lolita-esque patient, a Kimono-wearing woman who always tries to escape the ward, or the my-daughter-disowned-me-goodies-dealer-wig-wearer ex-porn-star (Shinobu Otake). LOL I mean, there are also characters like Sae (Mai Takahashi), and Miki (Yu Aoi) who are anorexic (although I think Miki could be bulimic), or your very-regular OD patient Kurita (Yuko Nakamura).

Now, color me fan-obsessed but Miki gave me the chills. I have seen my fair share of eating disorder films, and for the life of me… I can’t remember ever hearing a reason that didn’t make me roll my eyes until this. Maybe I’m not alone on this one, since I’ve read plenty reviews saying that Yu is quite good here, even though there are some really great performances throughout the film. However, I have a hunch people got hit blunted in the head by Miki because of it. Now, eating disorders are serious business, and we have heard a million times that it’s because of low self-esteem, and wanting to look thin like all the media lets us believe we could be… so whenever we hear the storyline, it’s always the same thing~~~ I’m fat, I wanna be thin… I don’t want to eat – but Miki (and Yu’s line delivery) tells you she wants to eat, but just can’t. Her low self-esteem has reached such level that she’s figure it out… whatever she eats would be a waste in her person, and that someone should be able to have it instead.

Now, onto more Yu. She lost a LOT of weight for this role, I remember reading something about ‘method acting’ and losing like 10 kilos (20ish pounds)? Can’t find it now, but I remember… Anyway, the weight loss bugged me a little – you can tell from some other film discussions – I just find that noticing shoulder blades is icky… let alone ribs, and eating disorder knees and elbows. I have bone-y hands and feet… it’s in my genes, but you could tell Yu lost a lot of weight because of the knuckles in her hands. And because losing and gaining weight quickly is dangerous for your health, this weight thing translates to various different films… and it’s very noticeable in Hyakuman-en, and partly on Shaking Tokyo.

PLUS, for all the guys out there saying they like them skinny… there is no such thing as skinny WITH boobs, just so you know. So if you ever get super skinny with boobs, you are very lucky~~~ but it’s very likely those boobs, aren’t real. Okay? So forget your anime fantasies with the boobalicious girly girls of the super thin waists… get over it, ya? For all of you, I suggest the film Real Women Have Curves.

Here’s some very few posters, stills and stuff. Yuki Uchida seems to be very tiny, in contrast to Yu. LOL