I blogged this maybe… two weeks ago? Can’t bother to figure out while ranting. Well, it’s the 2nd Saturday I’ve been waiting for it, but nothing… so~~ I figured that MAYBE I had gotten the time wrong, so I decided to check up on Sony Entertainment Television (aka Canal Sony) for times. However, their schedule doesn’t say anything about Iron Chef anywhere on their prime time.

SO! I thought… Ok, maybe if I check the section that has the info on “new series”! I was wrong… maybe I’m not looking closely, but that’s just POOR layout and user interface. I did find that Iron Chef is a NEW SERIES, but they fail to show me when they will broadcast, or when does it even begin broadcasting~ For all I know, they could’ve scrapped showing Iron Chef. 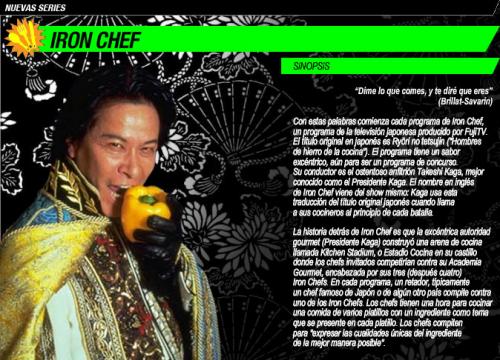