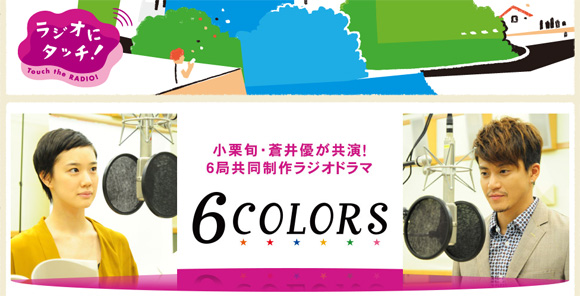 You know, I read that post about Japan — despite its technologically-advanced image — not being a tech nation at all [1][2], so when finding this about a radio drama took me back in time back to when my mom told me they used to watch radio telenovelas (back then known as radionovelas, of course). Having Yu working on one is so bizarre… not to mention troublesome as a fan xD

6 Colors seems to be an Osaka Radio [1] drama… a experimental drama of sorts, having six different up-and-coming playwrights write each one of the six episodes of the show [1] — kinda a little bit like Camouflage maybe??? — specifically titled with a different color:

The theme song of the series is in charge of Kobukuro and the song Heart’s Feathers (ココロの羽, KOKORO no Hane).

They also uploaded a brief Q&A with Yu and Oguri Shun.

On the go translation is up for grabs!

I don’t have a radio drama tag, so I’m tagging this jdrama and mobile phone drama just because. xD

xD If we’re all lucky, they’ll put all the episodes for the public later on. If not, we’re screwed.